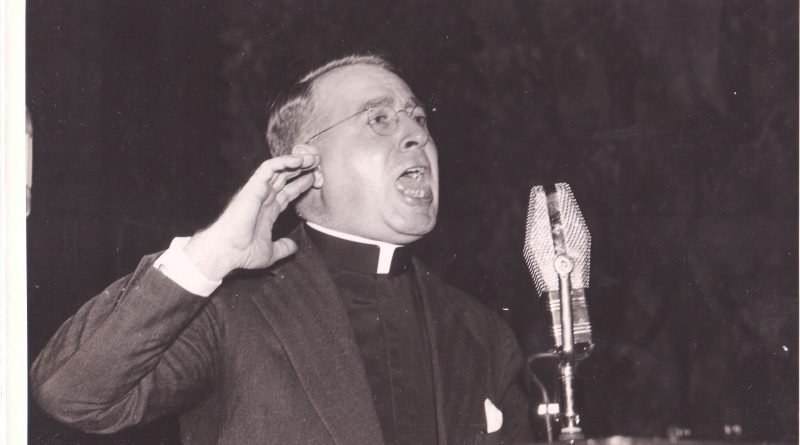 Oct. 27 marked the 40th anniversary of the passing of the great radio priest Charles Edward Coughlin (1891-1979). But while the orthodox press temporarily ceased its usual practice of throwing more dirt on his grave and fell silent about this anniversary, what’s far worse is that the very church that Coughlin rescued from probable oblivion in the 1930s, and gradually built into what became the magnificent National Shrine of the Little Flower Basilica, has largely besmirched his remarkable legacy.

The church’s website not only barely acknowledges Coughlin’s hard-fought role in creating the church in Royal Oak, Michigan with its unique octagonal nave and its stunning tower crafted of marble from the Italian Alps; it also recycles the tiresome smears about him, especially the crippling claim that he was an unrepentant “anti-Semite.” Such is the power of the propaganda that has been relentlessly disseminated over nearly a century to libel one of the most passionate priests in the history of the Catholic church. Even now, Detroit-area synagogues pressure the Basilica, the press and local officials to portray Coughlin in the most unfavorable manner possible.

What was Coughlin’s unforgivable sin? Via his intensely popular radio show and associated weekly newspaper Social Justice, the Canadian-born clergyman and gifted populist orator, from about 1930 until 1942, stepped beyond the pulpit and shook the cloistered worlds of illicit banking and power politics to their foundations.

Although his radio programs in the latter 1920s were at first purely scriptural in nature, he had an irrepressible sense of justice and an iron constitution, with which sought to hardwire Christianity into organic society and daily affairs. Accordingly, while utilizing his classic Irish brogue and his uniquely powerful and near-hypnotic delivery, he decried the merciless, sinful and fraudulent way that the banking system shook down society and put most people in peonage and into lives of sin and decline.

While declaring that the livelihoods and salvation of individuals and families were always foremost in his mind, he railed mightily against the Federal Reserve System and challenged the dark double-dealings and plutocratic propaganda that fomented both World Wars. His oratory, “So This is Democracy?” stands as one of the most powerful anti-war speeches of the last century, perhaps of all time.

But Coughlin’s most “unforgivable sin” was his measured but factual revelation of heavy Jewish control of the banking establishment, as well as deep Jewish involvement in the Bolshevik Revolution that murderously overthrew Christian Russia. For this, the notorious “anti-Semite” label that Father Coughlin endured when he was alive has, in effect, been “nailed” to his memory, to posthumously “crucify” him. [To hear Coughlin ably defend himself against shallow screams of “anti-Semitism” in his day, including, at the end, a stirring recitation and extended explanation of the Lord’s Prayer, listen here.]

Yet, amid the cruel calumny hurled at Coughlin back in his day and today, no one has ever bothered to ask: Was he really an anti-Semite? Or did he simply state uncomfortable facts while bringing the message of Christ to all peoples, including the Jews, for the priestly purpose of saving souls?

For the record, Coughlin’s view was that Germany’s National Socialism and Communism were basically variants of a centralized dictatorship, the former being nationalist and the latter internationalist in scope. So while Coughlin occasionally spoke favorably—largely if not totally before World War II—about some of Hitler’s nationalistic public works projects and financial schemes on a practical level, he repeatedly rejected both the National Socialist and Communist ideologies and instead sought a “Christian Americanism” that was nationalistic but was maliciously misrepresented as a species of Hitleresque fascism.

In Coughlin’s 1938 broadcast, “The Rightists Go into Action,” he clarified: “Is the federal government more capable and better equipped for managing the affairs [of] the various states than are the states themselves? Communists and Nazis, both of whom adhere to the principle of a strong central government, answer in the affirmative. The disciples of Washington, Jefferson and Lincoln answer in the negative. Nationals—that is, those who believe in nationalism rather than internationalism—also answer in the negative.”

In his early 1939 article, “An American Christian Program,” Coughlin, amid rising accusations that he was a virtual Hitler disciple who virulently hated the Jews, commented on the recent “Nazi Bund Rally” at Madison Square Garden as follows: “Meanwhile the vast majority of Americans are still Americans; they are sympathetic neither with the Nazi Bund nor with the Communist convention . . . . Thus, if Americanism and Christianity are opposed to both Nazism and to Communism, the time has come for true Americans and true Christians to organize against both.”

So, clearly, the miscreant media, in its never-ending war against Coughlin’s legacy, has never bothered to read Coughlin’s erudite articles or listen closely to his eloquent and often volcanic speeches that sold out many a concert hall and sports stadium during the Great Depression’s throes. The same can be said about those who pass as Western “historians.” Granted, Coughlin did say that the communists had “real grievances,” but he clarified repeatedly that the communists were gravely misguided in formulating their often-violent solutions.

For example, Coughlin acknowledged that Communism rightly “condemns the modern system of capitalism with its legalized usury, its burdensome taxes, its monopolies of industry and its commercial wars,” but, as noted, he was careful to note that the communists’ usually accurate criticisms of monopoly capitalism did not come with workable, morally sound solutions. To get to the core of the money problem, Coughlin wrote, among other works, the book, “Money: Questions & Answers,” a practical guide released under the auspices of the National Union for Social Justice (NUSJ), a political lobby that Coughlin founded in the Detroit area in 1934 to challenge President Franklin Delano Roosevelt’s reelection, among other goals.

The speeches, sermons, articles and books by Coughlin—who to this day is accused of merely exploiting the vulnerable masses during the Depression and giving the people “scapegoats” to hate—show that, far from being the brutish demagogue he’s portrayed to be, he was actually a highly capable analyst who carefully sorted out the root causes behind the world’s problems. Not only was his criticism of monopoly capitalism (as opposed to genuine free enterprise) not an endorsement of communism; he also felt that ideologies like Communism and Nazism would never have found fertile soil in the first place if Christian America and the West in general would understand their true predicament and drive out “the modern moneychangers” in a Christ-like manner.

Of course, that call to mimic one of Christ’s best-known actions during His ministry on earth is mainly what brought opprobrium upon Father Coughlin, though one of the biggest factors is that “polite society” refuses to face the fact that the prime movers and shakers in banking and high finance were, and still are, disproportionately Jewish. Coughlin also accurately identified Leon Trotsky and scores of other Bolshevik revolutionaries as another disproportionately large Jewish cabal bent on destroying Christian civilization. But he did so because he was a defender of the Christian faith, not because he “hated Jews.” He prayed and worked for the salvation of all, including the Jews, who he hoped would find Christ.

Notably, Coughlin’s parting of ways with President Franklin Delano Roosevelt over the “New Deal”—after his initial enthusiasm about the federal Depression-era recovery plan—turned the power of the federal government against a man of the cloth whose works had gone viral, reaching well beyond 20 million radio listeners at their peak before Coughlin was driven off the air and into obscurity.

Coughlin’s fate was sealed when the Vatican pressured him to retire from his radio-based activism. FDR’s administration even went so far as to revoke Coughlin’s U.S. Postal Permit that had enabled him to distribute Social Justice efficiently. That killed the newspaper. And the NUSJ, by the way, was forced out of existence after just two years.

Father Charles Coughlin lived out his days in Royal Oak at the church he founded and funded with donations drummed up via his radio show, steadfastly obeying the orders of Catholic authorities to return to daily priest work and put his activism aside. He passed away of heart failure on Oct. 27, 1979, two days after his 88th birthday.

He was laid to rest at Holy Sepulchre Cemetery in Southfield, Michigan, only a few yards away from the grave of Michael Gallagher, the Detroit Bishop who believed in Coughlin’s works and whose Canonical authority had protected and enabled Coughlin’s activism to endure for as long as it did. Gallagher’s passing in 1937, notably, created a vacuum filled by a church prelate who was less sympathetic to Coughlin.

May God rest Father Coughlin’s soul. And may he someday have his name cleared. The atrocious accusations that have been aimed at him have been taken at face value for far too long. It’s time to set the record straight. He was shut down because he was right and the people were listening. It’s that simple. 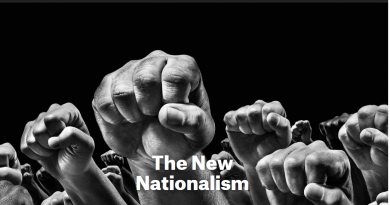 UPDATED: Exposing and Countering the CFR’s Latest: The ‘New Nationalism’