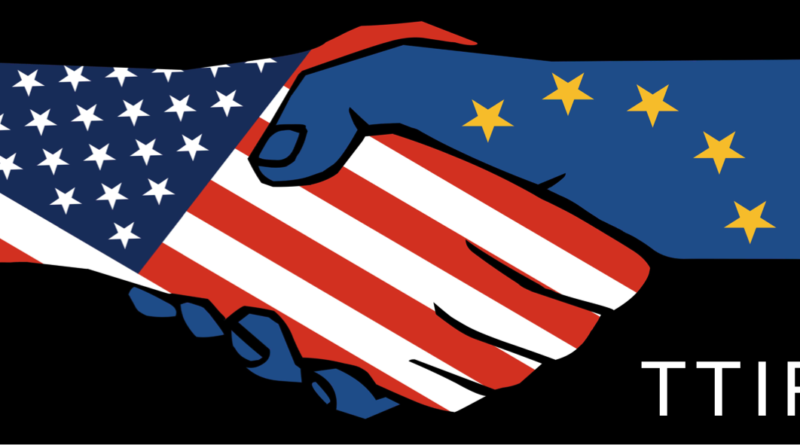 Overseas observers are saying that the Transatlantic Trade and Investment Partnership (TTIP)—a virtual sibling of the even broader Trans Pacific Partnership—is losing ground as of late. This apparent “tear” in the widespread economic web being woven by the secretive Bilderberg Meetings and related private world-planning clubs is good news, but the battle isn’t over.

Yet, according to Social Credit monetary-reform expert Wallace Klinck, the world’s severe economic defects, especially pertaining to the trade issue, are so far-reaching that unless they’re understood and corrected, the trade policies of the world will continue to be largely senseless while damaging genuine economic progress and eroding national sovereignty. More about that in a moment.

The TTIP, of course, is a massive EU-U.S. trade and investment treaty still under negotiation. Notably, the United Kingdom is still part of the EU despite the successful June 23 “Brexit” vote to exit the bloc. It remains to be seen precisely how the UK’s existing TTIP obligations will affect the Brexit process—a “divorce” that will take at least two years under Article 50 of the Lisbon Treaty.

In terms of possibly killing the TTIP, America may be getting some unexpected help from German activist Thilo Bode (“Tito Boda”). The noted social entrepreneur has sparked anti-TTIP sentiment so strongly, especially in Germany, that a number of observers feel the TTIP is nearly dead.

News analyst Alex Thomson of Eastern Approaches told UKColumn.org for its Aug. 30 news broadcast that, in Germany, TTIP support has slipped from an estimated 55% to 17% in two years.

Bode, 69, is best known for founding Foodwatch, an independent non-profit that boosts consumer rights in Germany. Accordingly, he has stressed that European consumer-protection laws that ban unhealthy foods and support food labeling would be placed on the chopping block under TTIP.

Bode is seen by many as an effective tactician whose efforts highlight what can be done when informed people unify behind an important issue. According to Politico’s European edition, since the start of 2016, Bode “has expanded his campaign . . . opening a new office in France—where skepticism over TTIP is mounting.”

Meanwhile, the same UK Column broadcast quoted French Foreign Trade Minister Matthias Fekl as saying: “There is no more political support in France for the [TTIP] negotiations. France calls for an end to these negotiations.”

Furthermore, German Economic Minister Sigmar Gabriel recently told the German news outlet ZDF that TTIP has “de facto failed,” while claiming that EU-U.S. negotiations have stalled. And according to the UK Independent, the 14th round of TTIP negotiations between U.S. and EU officials, held in Brussels in July, was the third session in six months. Evidently, out of the 27 chapters deliberated, neither side agreed on a single one.

Recently, Bode shifted his focus from TTIP negotiations with the U.S. to the lesser-known EU-Canada trade deal, the Comprehensive Economic and Trade Agreement (CETA).

CETA, the TTIP, the TPP and the Trade in Services Agreement complete the retinue of the most far-reaching trade deals that are in different stages of development. “If CETA [is successful], then TTIP will follow,” Bode predicted. But he told the European press that the opposite is true: If CETA can be stopped, then the TTIP could be taken down with it.

That, if it turns out to be true, is huge—because the North American (NAFTA), Central American (CAFTA) and other free-trade pacts so far have not lived up to the rosy expectations that free-traders have cited over the years. In fact they have fostered massive industrial losses, as the best-paying jobs have been eliminated or transferred to the cheapest-labor nations. This leaves former industrialized nations with mostly “service” jobs that pay poorly. This is why free-trade’s critics often describe the effects of these trade pacts as “a race to the bottom.”

“Bode’s efforts were instrumental in creating the public pressure that caused the EU to drop plans to ratify [CETA] without involving national parliaments. The decision, taken by the European Commission (EC), could prove to be a mortal blow to CETA, subjecting the treaty’s every [provision] to the approval of 38 national and regional legislative bodies. It also sets a precedent for TTIP and other future trade deals, potentially subjecting them to the same legislative bottleneck,” Politico explained.

But even before national parliaments get to vote on CETA, the EC has a tactic of its own: Try to pass the pact upfront in a provisional manner. Bode called that “a slap in the face of democracy.” However, the decision might aid CETA’s opponents, provided they effectively use it to portray CETA and its backers as undemocratic.

On Aug. 30, Foodwatch and two other organizations, Campact and Mehr Demokratie, “submitted a constitutional complaint against the CETA trade agreement to the Federal Constitutional Court,” a Foodwatch news release announced, adding, “125,047 people have endorsed the ‘No to CETA’ complaint—making it the biggest citizen suit in the history of the Federal Republic of Germany.”

Thomson cautioned, however, that while TTIP’s steep slip in popularity is welcome news to those who don’t want their nations “in hock to corporations,” the EU and the overall elite establishment represent a “many-headed hydra” that still might defeat the will of the people. In other words, the work to truly abolish TTIP requires a more sustained effort, so don’t pop the champagne corks just yet.

A core point is that each nation lacks sufficient domestic purchasing power to buy its own productive output of goods and services. Trade becomes a difficult and volatile search for producers to reach across oceans to access foreign buyers to take up the slack.

Klinck wrote: “Obviously, if nations cannot absorb their own consumer production because of a lack of effective demand (i.e., unencumbered consumer purchasing power) and are forced to compensate by obtaining excess export earnings and seeking foreign investment, it will be impossible to maintain cultural integrity as the financial pressures exert their inevitable and inexorable influence.”

He added, “While it makes sense for nations to trade in order to obtain otherwise unavailable and required [goods and] resources and/or to reap the efficiency benefits of comparative advantage, it makes no sense and is destructive of national sovereignty to be forced into international trade merely to join in a multi-national (and futile) scramble to capture the scarce credits necessary to facilitate the foreign sale of domestic production.”

And as automation technology rapidly eliminates human labor as a relative factor of production—meaning fewer jobs and less income in the conventional system—then all the developed nations face an increasing lack of effective consumer income.

The bottom line: Someone must lose for others to gain in the game of trade. There is simply no way that all nations can have trade surpluses by exporting more than they import to compensate for their inherent deficiency of consumer income. The winners realize trade surpluses while the losers run trade deficits—the gap between what little they export and how much more they import.

Thus, people and governments are forced into burgeoning debt (via credit cards, loans) just to maintain demand.  But the attached interest charges catch up with everyone eventually in a debt-based money system with an all-borrowed money supply.

Futile attempts to shore up these problems, Klinck added, “lead to distortions in production and investment patterns and encroachments upon cultures which generate social unrest, and ultimately war, as all nations attempt to compete by aggressively seeking to obtain and secure cheap resources from Third World countries.”

Repeat: Such circumstances foster aggression and war, as well as environmental exploitation.

Klinck continued: “It is a particular psychological curiosity and perverse circumstance that in the modern world we do not compete for goods, of which there exists an abundance—but rather [we compete] for money, of which there is a scarcity, by which to purchase [the goods].  We are driven to war not by real scarcity but by a shortage of money required to transfer and access this abundance.  We value and covet an abstraction over reality.”

Hence the need for Social Credit, a little-known but highly promising system (conceived in the early 20th Century, but based on time-honored principles) that’s neither monopoly capitalism nor socialism. Rather, it’s a decentralized system of economic democracy that would enhance society at both the individual and public levels in a profound manner. Borrowing and taxes would be so drastically reduced that they could become extinct.

Social Credit, as Mr. Klinck, “Social Credit Economics” author Oliver Heydorn and others have written and spoken about, stands outside the typical “left-right,” “Keynes-Austrian School” dialectic and is based on issuing regular dividends to consumers—calculated on the value of both human and automated output—interest-free as grant or allowance, and not as a loan.

A major goal of Social Credit is to finally increase our paltry consumer demand and bring it in harmony with our highly efficient productive output—without generating public and private debt.

The absence of that harmony is what puts some of us onto the road to perdition. And, don’t kid yourself, we’re all closer to that road than we may assume. The financial system is really THAT defective. Once the defects are exposed and understood, crime and corruption become rather easy to explain. As night follows day, lawlessness looms ever-larger. Fraud runs rampant. Truth is tied to the scaffold and wrong sits on the throne. Tyranny becomes a virtual guarantee.

An underlying cause is the fact that the productive system briskly builds price values and ever-larger quantities of goods that carry those prices. But the production system, due to inherent defects in the current economics infrastructure, cannot help but produce consumer incomes in a significantly slower, far less efficient manner. And with automation playing a growing role in production, fewer people are needed to make goods in the first place.

So how do we live without constant or near-constant work and without borrowing money or mortgaging the future with home “re-fi” schemes and credit cards? Social Credit answers this grand dilemma by lowering prices, while liberating people with the “wage of the machine”—and that “wage” is the key component of the solution that Social Credit’s founder C.H. Douglas, other Social Credit authors, futurists etc. over the decades have referred to.

But that liberating approach has been hidden by our real masters, mainly those in banking, who thrive from the debt-based system and corrupt our politics and purchase the media in order to protect that system and suppress solutions. That’s why typical economics news reports always carry the same failed options and weak half-measures that keep us “a day late and a dollar short” all the time.

In summary, through Social Credit, employment income is supplemented and could eventually be largely replaced by this dividend, in a system perhaps best described as a commonwealth. It means real freedom, not the fake freedom that “the system,” posing as our legitimate authority, asks us or our kids to die for in rigged, nonstop, unwinnable wars.

Abundance and leisure also could be our lot, rather than serving as draft horses for the super-rich and the defective system they foist upon the vast majority of the world’s peoples.

As Douglas said, “Systems are made for people, not people for systems.”

That is to say, money should flow naturally and serve humankind. Humankind mustn’t let itself be the servant of money. Money must be simply a means to greater ends, not an end in itself. To allow money to be created and controlled under constantly changing, impossible terms by a small, heavily protected, supremely arrogant elite of old-line families and their various deputies in politics, media, finance and higher education literally invites the very tyranny we naturally abhor.

Curious for a way out of the trade trap and out of the “work state” that mandates lifelong toil? For a more complete explanation of Social Credit, click this link. 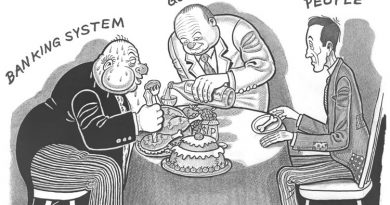 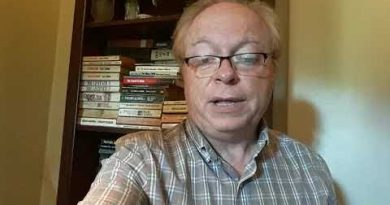