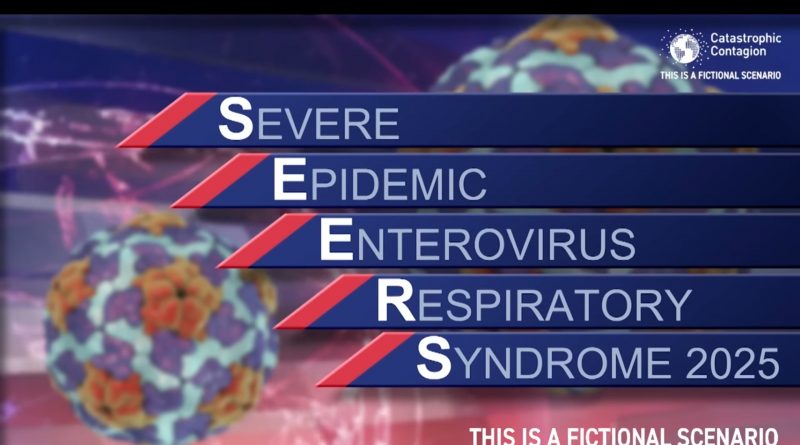 Ominously, the Center for Health Security on Oct. 23, 2022 held a “table-top” simulation of another contemplated worldwide pandemic jarringly entitled “Catastrophic Contagion: A Global Challenge Exercise.” It was largely patterned after the infamous “Event 201” simulation on Oct. 18, 2019 that eerily foreshadowed the announced “Covid 19” pandemic that started in early 2020 and brought with it a plethora of tyrannical measures that sapped and nearly sunk national economies, while fostering suicides, substance abuse and myriad other social ills.

As was the case for Event 201, Catastrophic Contagion was sponsored by the Bill and Melinda Gates Foundation  as well as the Center for Health Security of the Bloomberg School of Public Health at Johns Hopkins, although Event 201’s backers also included the World Economic Forum. WEF was conpicuously absent from direct involvement in the new exercise, it appears.
Catastrophic Contagion was conducted at the Grand Challenges Annual Meeting in Brussels, Belgium. “Grand Challenges,” according to the website
www.grandchallenges.org, “is a family of initiatives fostering innovation to solve key global health and development problems. Each initiative is an experiment in the use of challenges to focus innovation on making an impact [see that organization’s Grand Challenges fact sheet].”
Of particular note is the fact that, similar to the Event 201 exercise held at a New York City hotel, this latest pandemic-preparation simulation devoted considerable time to fighting what the participants called medical “misinformation” and “disinformation.” That strongly suggests that another monopolistic “vaccination” push, absolutely hostile to even the most constructive criticism, and at war with alternative medical and nutritional modalities, is likely waiting to be declared amid lurid claims of millions potentially dying from another ambiguous pathogen.
Indeed, a two-minute “official” video summarizing Catastrophic Contagion—whose 14 participants included vaccine-obsessed corporate globalist Bill Gates—reveals that organizers postulated that the new contagion would kill millions of people, most of them children, in order to scare the population to the highest possible degree. So, as one would expect with tyrants wanting to push a seemingly unchallengeable agenda, alternative voices are not to be tolerated, even while the World Health Organization, which would be at the helm of marshaling resources to fight the next “pandemic,” must regarded as beyond reproach.
A woman in the video in the for-now fictional scenario, in a news-like format, announces that the new pandemic, which is called Severe Epidemic Enterovirus Respiratory Syndrome, or SEERS, caused:
An estimated 1 billion cases worldwide and 20 million deaths, including nearly 15 million children; and countless millions are left alive but with paralysis and brain damage.
An 800-word overview, called Lessons from the Exercise, about this latest drill states the commissars of medical monopolism expect additional informational resistance this time around:

Countries need to collaborate to anticipate that threat and prepare to combat it with their own laws and procedures. Just as many types of economic and societal harms can be anticipated and accounted for in pandemic preparedness plans, so too can predictable false or misleading health messaging. Concertedly exploring ways to address this phenomenon on a national level in advance of the next pandemic will be crucial to saving lives.

Notably, while that last quote alludes to national approaches in handling the next pandemic that global elites continue to prophesize nonstop, the same official statement suggests states must build on a previous lack of confidence, go with the global flow, so to speak, and “strengthen international systems”:

WHO member states should strengthen international systems for sharing and allocating scarce public health resources. Groundbreaking global collaborations, such as the ACT-Accelerator [ACT-A] and COVAX, were launched during the COVID-19 pandemic. However, public health leaders still lack confidence in current approaches to fairly allocate medical countermeasures during a future pandemic.

While complete confirmation that a global pandemic treaty is the WHO’s end goal can be found in this UK Column writer’s recent article—click here—it’s conceivable that the extraordinarily fearful scenario of Catastrophic Contagion is designed to spook nations into accepting such a pact and surrender a significant degree of national sovereignty, coming as it does from a Geneva-based world “health” agency whose first secretary general, Canadian-born atheist George Brock Chisolm (1896-1971), became a psychiatrist who adopted the ultra-liberal view that children should be raised in an environment that’s as “intellectually free” as possible, “independent of the prejudices and biases (political, moral and religious) of their parents,” Wikipedia notes. That’s another way of saying children are, in the final analysis, wards of the state—the dominant model that, among other things, often forces kids to receive vaccinations in order to attend statist schools.
Notably, according to the WHO, Act Accelerator, or ACT-A, is defined as follows:

[A] groundbreaking global collaboration to accelerate development, production, and equitable access to COVID-19 tests, treatments, and vaccines. Launched at the end of April 2020, at an event co-hosted by the Director-General of the World Health Organization, the President of France, the President of the European Commission, and the Bill & Melinda Gates Foundation, the Access to COVID-19 Tools (ACT) Accelerator brings together governments, scientists, businesses, civil society, and philanthropists and global health organizations (the Bill & Melinda Gates Foundation, CEPI, FIND, Gavi, The Global Fund, Unitaid, Wellcome, the WHO, and the World Bank). Following the ACT-Accelerator launch, UNICEF and PAHO became delivery partners for COVAX, the vaccines pillar.

COVAX is the vaccines pillar of the Access to COVID-19 Tools (ACT) Accelerator. The ACT Accelerator is a ground-breaking global collaboration to accelerate the development, production, and equitable access to COVID-19 tests, treatments, and vaccines. COVAX is co-led by the Coalition for Epidemic Preparedness Innovations (CEPI), Gavi and the World Health Organization (WHO), alongside key delivery partner UNICEF. In the Americas, the PAHO Revolving Fund is the recognized procurement agent for COVAX. It aims to accelerate the development and manufacture of COVID-19 vaccines and to guarantee fair and equitable access for every country in the world.

A key message of the overall Center for Health Security presentation is that, if only more nations had obeyed centralized orders dictated by the WHO and other outlets—referring to lessons they should have learned from Covid-19, then “the toll might have been much less.
But what we actually learned from the big pharma-big government-mass media cartel unholy trinity, what this writer has dubbed the “covidocracy,” is that big numbers of apparent covid vax-related deaths and serious adverse reactions, stemming from mRNA jabs that don’t even qualify as traditional vaccines and therefore should not be immune from major lawsuits, don’t even seem to phase the despotic medi-crats who are inebriated on power for power’s sake.
To be sure,  the Center for Healthy Security at Johns Hopkins has held three documented table-top exercises that weren’t followed by actual pandemics, at least not immediately: Clade X in 2018, Atlantic Storm in 2005, and Dark Winter in 2001. (See this link: https://www.centerforhealthsecurity.org/our-work/exercises/)
Yet, if recent history pertaining to Event 201 means that this latest gambit may soon be declared as real, and because it’d be a mistake to take that possibility too casually given the covidocracy’s audacious and fantastically profitable lurch into despotism via the still-ongoing covid-19 power grab, we could soon be in a fight for our very lives—an information war to end all information wars—to preserve our foundational liberties and medical choice. However, with the orthodox media waning and alternatives like UKColumn.org and other reliable outlets climbing, the odds of victory for sanity, common sense and constitutional rights are getting better all the time.
So let’s press on. Carpe Diem!