By The TRUTH HOUND — “Stop the Presses” News & Commentary

McALLEN, Texas—Republicans who gathered in McAllen, Texas to hear the Nov. 8 election returns told the TRUTH HOUND, representing American Free Press, that it’s clearer than ever that the mainstream media (MSM) engages in malpractice and has lost credibility to an unprecedented degree over its often malicious coverage of Donald J. Trump’s presidential campaign. Therefore, the MSM deserves to be replaced by an alternative media.

As this writer shared AFP articles about electronic election theft and media bias at McAllen’s Valencia Center with these Trump supporters, they were anticipating the Trump victory that was soon to come but sensed that the MSM would be highly reluctant to admit that Hillary Clinton is history.

Meanwhile, the more impartial Spanish-speaking Univision network called the election in Trump’s favor about 45 minutes before mainstream U.S. networks started to do so, with Fox News leading the way in the U.S. CNN waited the longest, until 2:38 a.m. Eastern, to fully admit Trump’s electoral-vote win—after his New York acceptance speech already had started.

Most anchors and pundits on American networks fretted and freaked out over Trump’s triumph. Neo-conservative Weekly Standard publisher William Kristol, appearing among several CBS pundits during election returns, stammered during the wee hours of Nov. 9 that Mr. Trump has a “70-year old world order” to attend to, so the wealthy businessman shouldn’t get too serious about charting a more populist course for America.

Kristol echoed what this writer reported covering recent Chicago globalist conferences where attendees made it especially clear that the U.S.—through its assigned role as world cop—must forcibly advance the economic architecture stemming from the 1944 Bretton Woods Conference: The World Bank, the International Monetary Fund and the World Trade Organization. The U.S. Constitution evidently isn’t part of the equation.

Cythia Bebon, a McAllen-area school administrator, told The TRUTH HOUND that she couldn’t bear the anti-Trump bias that had saturated the airwaves.

I’ve been on a media fast for 40 days,” Mrs. Bebon said. “But the real election surprise was the uprising of the American people.”

Mrs. Bebon and others in McAllen, including Rick Gonzalez, agreed that the media engaged in various tactics to try and sway the election’s outcome, with constant polls trotted out so everyone would be tempted to “follow the pack” for Hillary.

“It also depends on who you’re polling . . . and it depends on the way you ask the [polling] questions,” Gonzalez told AFP, pointing out that, as he understood it, heavily Democratic areas were polled in order to achieve a desired pro-Hillary result.

You can leave out one or two words in the poll and that changes the whole context of a question,” Mrs. Bebon added.

Priscilla Duran, a student at the University of Texas/Rio Grande Valley, the area’s premier college, indicated it’s tough being a young Republican in a south-Texas region that’s heavily Democratic to begin with—while she’s also braving the challenges of being the university’s official Trump representative when academia is so hopelessly “politically correct” that conservative perspectives are rarely tolerated on campus.

While Ms. Duran chided the MSM for often “focusing on one protestor” at crowded pro-Trump rallies, she noted, in light of Trump’s call for tighter border security, that being Hispanic doesn’t always mean believing in open borders. She recalled that her grandparents had their Hidalgo County home broken into by illegal aliens. The intruders, she said, drugged the home’s occupants.

Jeny Martinez said at the McAllen gathering that she understands that some women cross the border into the U.S. up to nine months pregnant and sometimes sue American doctors when their babies die from the extreme hazards of the journey.

She added that the MSM went to incredible lengths to protect and promote Hillary, especially considering that anyone else under FBI investigation would be hard-pressed to apply for a 9-to-5 job, let alone be allowed to run for president like Hillary did—while the FBI probed her transmission and deletion of official government information with private computer servers during her time as secretary of state and beyond.

According to Gary Franchi of the Next News Network online, the tables are turning on the MSM. In an age of citizen journalists armed with cellphones that can livestream news online in real time, he said the MSM is being backed into a corner and must absolve itself of its sins and shortcomings—or perish.

Fox News, which was mainly in Trump’s camp while the other networks were pro-Hillary, drove Trump’s 2016 candidacy less than popular online blogger Matt Drudge, according to Carl Bernstein, the veteran Washington Post reporter famous for helping expose the Nixon-era Watergate scandal.

Evidently, the MSM’s false election narrative, whose content was influenced by the Clinton camp, help sparked the leftist anti-Trump protests and riots that erupted in over a dozen U.S. cities just after the election and included calls for killing Trump.

These people are out in the streets . . . breaking store fronts down because they believed the media lies they were fed,” Franchi said.

He made that remark just as news broke that New York Times Publisher Arthur O. Sulzberger Jr. issued a damage-control letter to reassure subscribers that while the internationalist daily was allegedly blindsided by the “unconventionality” of the Trump campaign—leading its editors to “underestimate his support among American voters”—the Times would continue “to hold power to account, impartially and unflinchingly.”

But Sulzberger, while obliquely admitting the Times’ bias against Trump, forgot to mention he attended the spring 2016 secretive meeting of the American Enterprise Institute at Jekyll Island, Georgia, where key Republican politicians and strategists schemed on defeating Trump—showing that the Times, for all intents and purposes, is part of the power structure, not its watchdog. 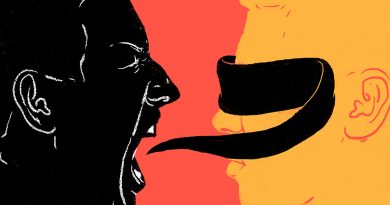