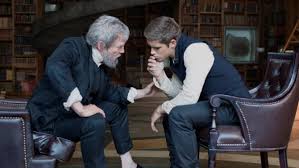 “The Giver” is an intriguing movie which offers a glimmer of hope in a hopeless world, while serving as an apt metaphor for the kind of society in which we’re captive while thinking we’re free.

This 2014 Canadian-American-South African movie was recently brought out on Netflix. In it, a young man, assigned the name Jonas, at first is just as content as everyone else—living in a post-apocalyptic “utopia” where he’s surrounded by totally like-minded friends. They all began as babies born in a lab after a calamity called “The Ruin” nearly extinguished humanity and brought about a total reconfiguration of what was left of society.

The state, citing this horrific past, while nurturing the remnant of humanity back to its definition of health, has completely rejected the “messiness” of past human existence. (Everything is depicted in black and white to emphasize the state’s sterile worldview).

The “families” that the state arranges cannot feel the true bond and devotion of actual blood-relations. Education is attuned to assigning everyone to their unchosen lifelong role. Cameras with listening devices are everywhere. Rallies are held so everyone is constantly reminded to consent and conform—all for one and one for all—or else.

But the thing that’s most forbidden is any knowledge whatsoever of history. This people in this society, even if they can dimly recall their unremarkable “yesterdays,” have no memories to speak of and certainly no history. This aspect of the movie is portrayed in a most interesting and instructive way.

When all the young adults attend a mandatory society-wide gathering where everyone is assigned their roles, Jonas is the last one to be given his role by the state. Being the last man standing is significant, for everyone in attendance knows what it means: Jonas is the one entrusted to be the “Receiver of Memory” and will commune with “The Giver.”

The Giver is superbly played by Jeff Bridges. Meryl Streep is the emotionally-frozen state leader under which he serves. (Here we get a glimpse of the brutish woman “president” thing, a ‘la Hillary Clinton or Theresa May and it’s ugly). She can invade any domicile at any time for any reason by appearing as a hologram. Her central role is to make sure that historical knowledge remains strictly confined, and that things like childbirth, real families, pain and suffering, true joy, personal sovereignty, etc. are never, ever known, much less practiced, by her society at-large.

Yet, the young man chosen to learn from The Giver—simply so he can become the next Giver when the older one passes away—is profoundly affected by what he learns. He is given visions of past wars and harrowing atrocities, but also of true love, natural childbirth, real siblings, gatherings with actual family and friends, adventure and so on. As this awakening continues, he realizes he loves a fellow citizen, a lovely young lady named Fiona. The Giver tells him about love as being perhaps the most precious thing of all.

It turns out that Jonas has that genuine human “spark” that the state’s scientific leaders thought they had fully extinguished. And because The Giver is a highly moral man (who carefully conceals this fact in his official contacts and duties), he and his apprentice collude to overthrow this artificial society.

“Memories are not just about the past . . . they can change things, make things better,” The Giver tells his apprentice, echoing George Orwell’s warning, “Those who control the past, control the future.”

The Giver goes on to tell Jonas that the state that runs this anti-septic world, a state that calls itself “Community,” made it a central policy to “end all color, all race, religion . . . they created sameness.” This statement addresses apparent Illuminati goals in real life.

To cut through that sameness, The Giver plays a grand piano for Jonas, who’s brought to tears at such beauty. The Giver also gives Jonas a vivid vision of snow sledding, which brings the young man untold enjoyment. In the vision, the sled leads to an idyllic home in the woods, with which Jonas feels a strong connection. The Giver explains that a “home” is something that used to exist and was totally different than the “dwellings” of Community.

The Giver, interestingly, explains that snow no longer exists due to climate control—which is one of many hints in this movie of what governments are doing and where they’re headed, in seeking total surveillance and control.

Jonas cannot believe that Community would ban all beauty, all grace, all normalcy and redefine human existence along such rigid, drab lines. There’s no winners, no losers, no love, no hate, no music, no fear, no memory, no dancing and no “lies,” except for the fact that Community is one Big Lie.

There are some aspects of Community that are worthy of emulation, such as banning war, reducing breakneck competition, ending the obsession with fame, and bringing some necessary direction to society. Jonas is given a glimpse of being a soldier in Vietnam and he’s terrified at such cruelty. This briefly makes him pause at the supposed glories of the past. But, with wisdom comes pain, The Giver tells Jonas.

True to the painful lessons of unchecked power, however, Community goes too far in its regulations, leading inexorably to domination. A strict curfew is enforced against all. And everyone in Community is required to use dispensers built into every dwelling with which to take their morning injections of a drug that makes everyone docile—a hint at fluoride’s likely effects in municipal water and the forcible vaccination and drugging of society in our “real” world.

Notably, Jonas, as the “Receiver,” meets with The Giver for several sessions in a cabin-like structure near the very edge of Community, right next to where the “Boundary of Memory” is located. Beyond that is a forbidden zone, a wild land that contains traces of the past that few are supposed to see. Curiously, the movie gives the viewer the subtle impression that the earth is more like a plane, not a globe. Make of that what you will.

While readers should watch the movie to see all the gritty details and several unexpected twists and turns, one of the things that turns the protagonist into our hero is witnessing his assigned “father” perform one of his state duties, which is to kill unwanted babies.

This “abortion” of a living, viable infant, surprisingly enough, gives this movie a decidedly pro-life theme, which is no small matter in terms of the movie industry’s usual ultra-liberal, anti-natal philosophy. And the movie has its imperfections, such as when it shows a snapshot of Nelson Mandela as if he were a real hero of the past, when in real life he was a butcher sold to us as a hero by Big Media and its government allies.

Nevertheless, we see Jonas become an example of what newfound knowledge can do to unravel the infrastructure of the powers-that-be, if that knowledge is focused and yielded in such a way that reveals the Big Lie for all to see.

Thus, The Giver makes each viewer a Receiver—a “Jonas,” if you will —who can apply key lessons to return our world to morality and normalcy.

While the movie doesn’t get into the money question, we, the living must start by permanently removing the control of interest-bearing money creation and credit-creation from the hands of the private central bankers who, if left unchecked, will use their supreme monetary leverage to drive us into the abyss. THAT LEVERAGE MUST BE REMOVED. WE MUST ALL AGREE ON THIS ONE PRIME ACTION.

If not, the few survivors would have it much worse than those in Community.

4 thoughts on “‘The Giver’ Movie: Tyranny Overcome By the Human Spirit”