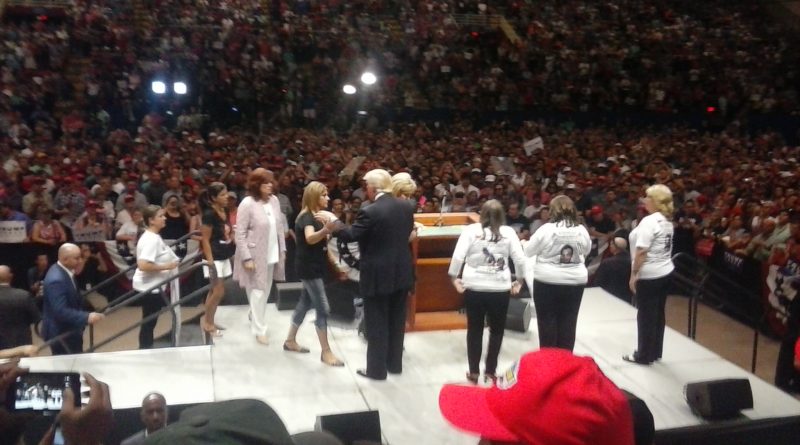 AUSTIN, Texas, Aug. 23, 2016 – While Donald J. Trump at a jam-packed Aug. 23 Austin, Texas rally only made an oblique reference to a probable rigged election in Hillary Clinton’s favor on Nov. 8, this writer, just after covering the rally, was able to determine that the Trump campaign is aware that elections being “rigged” means that electronic voting machines would be the chief means of rigging them.

A Trump national rally coordinator and a regional campaign staffer from Louisiana not only received copies of this writer’s recent American Free Press article on Ohio activist Jim Condit Jr. sounding the alarm that Hillary may try and steal the election—and that electronic voting machines with secretive, alterable source code would enable that—they also said they were intent on sharing the article with the Republican nominee.

The national coordinator, asked how frequently he sees Trump, replied “I see him every day.”

He and the Louisiana man, however, preferred not to give their names, citing campaign management rules. They seemed sincere in sharing AFP’s concerns that, without honest, transparent elections, the whole electoral enterprise is a sham. They inferred that Trump was reticent to name the electronic machines as the culprit, at least for now, whenever he frequently refers to “the system” as being “rigged.”

Election fraud via voting machines, which is the election issue that matters most, is overshadowed by an undue fixation on “voting rights,” with liberal groups and activists acting as if poor and minority voters are automatically harmed when they’re simply asked at the polls for valid, sufficient proof of their identity. Others fret over manipulation of absentee ballots.

Overlooked is the fact that when some people can vote with minimal identification (such as when potential illegal non-citizens can merely present utility bills without photos to poll workers and expect to be able to vote) then THAT DISENFRANCHISES THE ENTIRE VOTING PUBLIC BY CREATING TWO SETS OF RULES.

Yet when relatively few people of whatever color, class or age are turned away due to insufficient identification, the conventional media act like those citizens are the ones who’ve been cheated. Usually, however, that’s not the case. If a voter really cares about voting, he or she should make the effort to get an ID that satisfies state law.

In the line of rally attendees that stretched for hundreds of yards outside the Travis County Expo Center, people’s political spirits were high, and many spoke of serious concerns over the issues. As this writer handed out 300 copies of the above-noted article about Condit’s warnings, about every tenth person seemed to know something about the issue, which is encouraging.

“You can’t even request a paper ballot anymore,” one attendee said.

Somewhat less encouraging were comments made by various speakers leading up to Trump’s powerful oratory, painting Iran as an existential threat to the U.S., a flimsy claim that is not supported by the facts. This is not to say that Iran is pristine or entirely benevolent, far from it. But the Persian state, which suffers from corruption and some tyrannical elements, has never made a credible, direct threat against the U.S. With nearby Israel “unofficially” possessing some 400 nuclear weapons (and Iran having none), not to mention the huge nuclear arsenal of the U.S., it would be exceedingly unwise for Iran to resort to overt aggression against the West.

Still, surprise speakers at the Trump rally in Austin included a man who allegedly deserves the title “America’s mayor”—Rudy Giuliani (former New York City mayor)—who rattled the anti-Islam saber rather intensely. Sen. Jeff Sessions (R-Ala.) also offered brief remarks, as did a black minister and Hispanic businessman—to project the image that Trump will be fair to all Americans, “minority” or not.

Some definite humor was added by Texas Ag Commissioner Sid Miller, who said, “All those three-letter federal agencies, IRS, EPA, BLM, make me want to say lots of four-letter words,” over stringent land-use and farming regulations and heavy taxation.

Before and during Trump’s speech, the throngs of attendees repeatedly chanted. “Lock her up!” about the stated need to jail Democratic Presidential nominee Hillary Clinton over her many apparent, but unpunished, crimes and transgressions.  Earlier, vendors were peddling scores of “Hillary for Prison” shirts, buttons and bumper-stickers. Other shirts about Trump read, “Finally, somebody with some balls.”

Trump’s speech, occasionally interrupted by hecklers, was passionate and to the point. He did say that, as much as she deserves it, Hillary likely would not be punished, at least not for a while, for her malicious, manipulative misdeeds and shady influence-peddling.

He also called loud and clear for building a border wall, dumping the Trans-Pacific Partnership anti-sovereignty trade treaty, while bringing back good U.S. jobs in the process (and through cutting regulations and taxes). Hillary, her empty rhetoric to the contrary notwithstanding, supports the TPP treaty.

“We’re one nation, one people [with] one great future. It’s going to be America first again . . . proud again, prosperous again, safe again,” Trump declared, with that last point based on addressing violent crime in our cities (while upholding the Second Amendment) for the protection of minorities and everyone else. He called on blacks and Latinos to give him a chance, while saying: “Hillary only sees you as ‘votes,’ not as people.”

He announced, that, if elected president, he’d call for special prosecutor to look into the influence-peddling regarding the Clinton Foundation and Hillary’s time as Secretary of State. “It’s hard to figure out where the State Department ends and the Clinton Foundation begins,” Trump said, garnering deafening applause. “Why were her lawyers set free after they destroyed her emails . . . it’s lie after lie after lie.”

In another unexpected development, eight moms, whose children were killed by criminal illegal aliens, were welcomed to the stage. One of the moms said her son was tortured, murdered and set on fire. Another, a legal German immigrant, said she lost her only son to an illegal alien who recklessly drove a car head-on into her son’s car. (PHOTO CREDIT: The moms are shown entering the stage in the above Truth Hound photo. They were accompanied by Border Patrol agents supporting Trump)

Trump hit the Austin rally after visiting the famed “Austin City Limits” musical auditorium early the same day to film a Fox News segment. He visited Fort Worth that morning. On Aug. 21, author Roger Stone, a longtime GOP consultant, appeared at a Dallas book-signing and told a Truth Hound associate that he, too, was well aware of electronic election theft.

“This election will decide whether we have a border—whether we have a country,” Trump summed up at the Austin rally, where about 1,000 people were unable to get in, on top of the 8,500 who got inside.