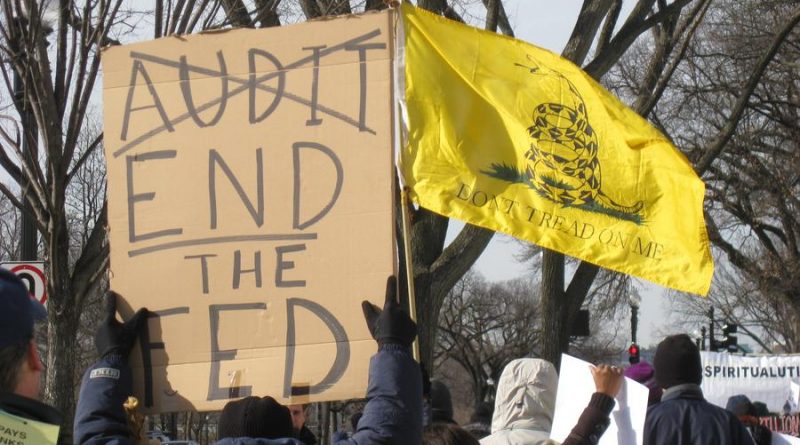 When the House of Representatives passed the stimulus bill March 27 and high-tailed the legislation to President Trump’s desk for an assured signature—in an usually unified bipartisan effort to get checks into people’s hands and “backstop” small businesses amid the COVID-19 scare—is it possible that a more fundamental long-term economic “fix” was already in the works? Some say yes, and it involves the prospect of nationalizing the Federal Reserve.

“This appears to be the first phase of ending the Fed, something that many of us have been hoping and dreaming about for a very, very long time,” Daniel Lee, an Alaska based alt-media commentator stated on You Tube.

But beyond the views of so-called “fringe” observers, consider the following statement by noted mainstream financial analyst Jim Bianco, from an article he wrote for the equally mainstream Bloomberg financial website:

“The federal government is nationalizing large swaths of the financial markets [while] the Fed is providing the money to do it. [A private company] BlackRock will be doing the trades. This scheme essentially merges the Fed and Treasury into one organization. So, meet your new Fed chairman, Donald J. Trump.”

President and founder of Bianco Research, Bianco essentially argues that the Fed is acting more like a service provider while the Treasury Department, which is ultimately under President Trump, is in the driver’s seat—rather than the other way around.

“It’s the alphabet soup of new programs that deserve special consideration, as they could have profound long-term consequences for the functioning of the Fed and the allocation of capital in financial markets,” continued Bianco, who named those programs as follows:

Notably, the first four of those programs are named in a Treasury Department press release, dated March 23, which outlines Treasury actions for adding liquidity—spending power to fuel consumer demand—amid the COVID-19 syndrome.

Bianco further explained: “The Fed will finance a special purpose vehicle (SPV) for each [of these programs] to conduct these operations . . . . What does this mean? In essence, the Treasury, not the Fed, is buying all these securities and backstopping of loans; the Fed is acting as banker and providing financing. The Fed hired BlackRock Inc. to purchase these securities and handle the administration of the SPVs on behalf of the owner, the Treasury.”

Furthermore, a University of Kentucky-educated, retired economics professor, with whom this STOP THE PRESSES editor is well-acquainted in terms of his solid understanding of the Fed, requested anonymity. But he told STP there’s a distinct possibility that the Fed may be en route to nationalization, due in part to President Trump’s especially assertive pushback against Fed excesses (e.g., opposing planned interest rate hikes), due to the Trump-inspired climate of populism and due to the unique, urgent circumstances under the COVID-19 scare in which things that normally would not happen might become a reality.

He also told STP: “The Fed was created as an independent agency in 1913 because they wanted to shield it from political influence. Now that’s impossible to do completely because of the president appointing members of the Fed’s Board of Governors. Historically, presidents have engaged in jawboning, such as Trump bad-mouthing Fed Chairman [Jerome] Powell.  It’s possibly in the works that the Fed will be brought under the direct control of the Treasury. If that is true, since Treasury is part of executive branch, it wouldn’t give the president direct Fed control of the Fed, but it would give him far more control than in the past. This probably has to go thru the House and the Senate since the Fed was not created under the Constitution and instead was created legislatively. Nonetheless, if nationalization happens, the president would have control over the Fed’s policies.”

Interestingly, the  first plank of the American Monetary Act, a model bill spearheaded by the AMI (American Monetary Institute), and floated in Congress in 2011 as H.R. 2990, states: “Incorporate the Federal Reserve System into the U.S. Treasury where all new money could be created by government as money, not interest-bearing debt, and spent into circulation to promote the general welfare.”

So, might these challenging times lead to subduing the Fed and, in essence, spark the return of Abe Lincoln-style debt-free government “greenbacks” at this time of crisis, just as Lincoln did over the crisis of the Civil War? Or as Britain did by creating its own Bradbury Pound currency amid the throes of World War I?

Or will the deep state turned the tables and outlaw cash in a COVID-19 inspired dystopia where one’s transactions and movements are intimately tracked and dissidents are demonetized?