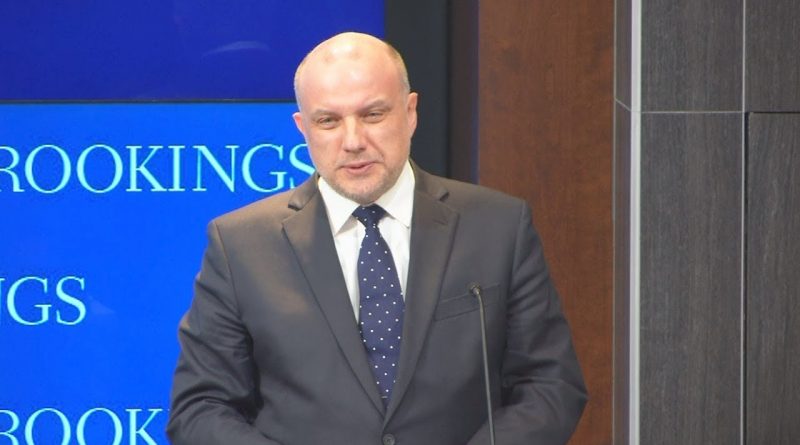 WASHINGTON, D.C.— For this March 6th, 2020 video edition, I was delighted to return to UK Column News to go to the next level chronicling the nefarious think tanks that go to great lengths to usher policy initiatives and personnel into government, in order to lay the physical, political and economic infrastructure for world government.

Above, UK Defense Secretary Ben Wallace addresses the NATO-connected Atlantic Council in Washington D.C. the afternoon of March 5th, while moderated for part of the program by PBS News Hour’s Ali Rogan.

As noted in this UK Column broadcast, Wallace said a number of revealing things, not the least of which was his assertion that traditional notions of war and peace no longer apply; rather, a war footing should be seen as a “constant.”

This video provides a careful outline of the latest activities of the Atlantic Council, detailing not only Wallace’s visit to the Council but also a visit to the Council the day before by Estonian President Kertsi Kaljulaid. She came to D.C. to outline the pending “3 Seas Initiative,” which seeks to fully integrate the energy, security and digital communications systems of the Baltic nations and other areas of central and eastern Europe into the “grid” of the European Union and the greater “transatlantic” community. This is called “completing Europe,” a very intriguing matter that deserves close scrutiny now that the UK has ostensibly “divorced” the EU.

As also outlined in the video, and in my report below (which has more details that the video) when Estonian Defense Minister Juri Luik on March 2nd visited the Brookings Institution in Washington (see photo at very top), I put him on the “hot seat” about some of his assertions regarding Western policy toward Russia and other aspects of geopolitics.

WASHINGTON, D.C. March 2, 2020–Estonia is playing a surprisingly large role in sponsoring NATO exercises, involving an estimated 24,000 U.S. troops this spring near Russia’s border, even while the small Baltic nation’s top officials visit the nation’s capital to advance the longstanding but highly questionable narrative that Russia has a total monopoly on geopolitical wrongdoing in the region.

This reporter attended Brookings Institution events as well as those by the Atlantic Council and other deep-state institutes the week of March 2 to get a closer look at the intricate ways these tax-exempt outfits continually lay the infrastructure of world government.

On March 2, in the company of globalist veteran Strobe Talbott, who was in the audience, Estonian Defense Minister Juri Luik addressed Brookings at its 1775 Massachusetts Avenue headquarters and cast Russia as the West’s unyielding, unrepentant arch-foe. So, during the Q & A period following his formal remarks, he bristled a bit when pressed about why Russian leader Vladimir Putin, whatever his transgressions, would recklessly attack the Baltic States (Lithuania, Lativa and Estonia) as Luik suggested, when Russia knows the West’s retaliation would be devastating.

This reporter also pressed Luik on why he suggested that Russia should simply forgo its policy of maintaining military “buffer zones” along its border with NATO-member states, even though common sense dictates that every nation, friend or foe, would naturally exercise its right to create such zones, especially considering that Russia has seen NATO constantly add more nations to its roster and apply further pressure to “threaten” Russia from the vantage point of the Russian people and their government.

“Russia’s going to perceive NATO as the expansionist power bloc,” this writer pointed out. “It’s almost like everything’s in reverse—it depends on which end of the ‘telescope’ you’re looking down [as to who the “aggressor” is]. An in addition, Putin is a lot of things . . . but he’s not stupid. What benefit would he get out of attacking the Baltics?”

“Wars have been started by very smart men,” Luik replied, adding that when he formerly served in a European think tank, had he predicted back then that Russia would attack Ukraine, “I would have been kicked out of the think tank community. Russia and Ukraine . . .  two brotherly nations . . . one borne of the other nation with a common heritage—and still we have a war between them.”

On that note, Luik avoided the counternarrative that Russia did not actually “annex” Ukraine’s Crimean Peninsula; rather, Russia moved into Crimea and conducted an election to re-enfranchise and protect the Russian-leaning majority there in 2014 only after the West, via former Assistant Secretary of State for European and Eurasian Affairs Victoria Nuland, overthrew Ukraine’s Russian-leaning government in February of that year in a coup that’s soothingly called “the Maidan Revolution” by the scholars inhabiting the D.C. Beltway’s think tanks.

And while Luik claimed that NATO’s battalions in Estonia do not compare in size or strength to Russia’s massive tank forces and other military assets near the border—hardly a surprise, since Russia is defending its homeland from multi-national assets deployed in the Baltics—Luik also told this writer:  “I’m always very careful when people say to me, ‘Putin will never attack you.’ Because people who say that don’t have the means to guarantee what they say. They might be right, but they might be wrong. And if they’re wrong, they cannot help me. So that’s why I prefer . . .  [military] preparedness.”

Estonia has been a NATO member since 2004 and an “independent state for three decades,” according to Brookings’ foreign policy director Michael E. O’Hanlon, who, serving as moderator, added that Luiks served in several government posts besides defense minister, including as Estonia’s ambassador to Moscow from 2012 to 2015.

“NATO has its cyber command and does a great deal of cyber [exercises] in Estonia,” O’Hanlon remarked, while noting that Estonia meets or exceeds the requirement that it put up at least 2% of its GDP to support NATO. “So, its military budget in percentage terms is among NATO’s highest,” O’Hanlon said of Estonia.

“We have a worthy alliance, but we need to strengthen it further,” Luiks said of NATO during his brief formal remarks. “We all need to spend more on defense and do it wisely.  . . .  We are now even exceeding the 2%. The growing number of allies have done this as well.”