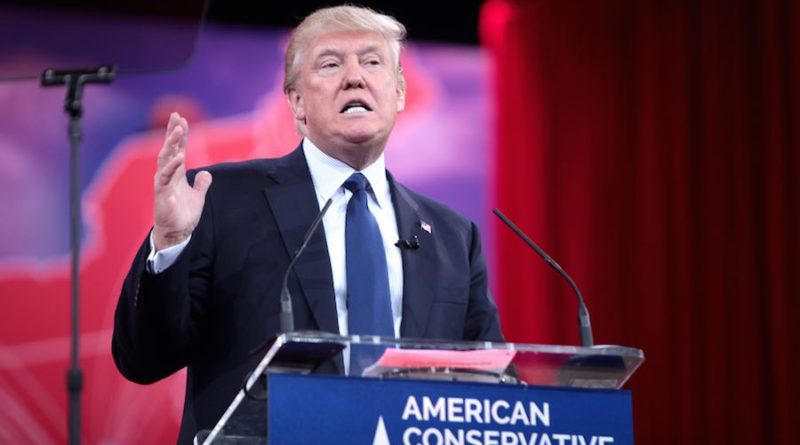 Assessing Donald Trump’s first two years as president shows that while he may not be a constitutional scholar, he is a savvy strategist who generally champions conservatism, often with a populist hue, in several ways, especially domestically. However, his foreign policy, while it exhibits some welcome decisions in terms of backing America out of a one-world-government system, clearly is more of a mixed bag.

However, none other than the Council on Foreign Relations (CFR)—representing the summit of U.S.-based globalist policy formulation—fretted in its stuffy Foreign Affairs journal:

By withdrawing from the Trans-Pacific Partnership (TPP), the Paris agreement on climate change, and the Iran nuclear deal; embracing mercantilist trade policies [e.g. enacting protectionist tariffs] and continuing to question the value of NATO, Trump has shown that he said what he meant and meant what he said. He is not looking to reinvigorate the rules-based order by leading friends and allies in a common cause. They are the foes he wants to beat.”

The CFR’s criticism is particularly important to acknowledge, since the fact that such a deeply influential, secretive private-governance outlet dislikes Trump’s policies constitutes strong evidence that Trump’s pushback against the globalist establishment is grounded in reality. Put another way, it’s one thing for the Democrats, never-Trump Republicans and the mass media cartel to disdain Trump’s views and actions; but it’s quite another for the CFR, the Chicago Council on Global Affairs and all the other internationalist think tanks, funded by big banks, NATO, defense contractors and other large corporations, large foundations etc., to gripe about Trump. You don’t earn their opposition unless you’re doing something right.

On the home front, pharmacists no longer must remain silent about cheaper cash options for prescription medications, thanks to legislation Trump signed in October. The legislation lifted a gag order that tended to inflate the price of prescription medications. Before, even when a prescription’s cash price was less than what customers would pay via their insurance coverage, pharmacists could be sanctioned for informing customers about less expensive alternatives.

“Americans deserve to know the lowest drug price at their pharmacy, but ‘gag clauses’ prevent your pharmacist from telling you!” Trump “tweeted” on Twitter in September 2018, shortly before the Senate voted on the legislation.

According to the Journal of the American Medical Association, “People with Medicare Part D drug insurance overpaid for prescriptions by $135 million in 2013. Co-payments in those plans were higher than the cash price for nearly 1 in 4 drugs purchased in 2013.”

In a similar vein, Trump also ended the mandate, hatched under Obamacare, that had required religious medical institutions, such as Catholic hospitals, to provide contraceptives and abortion-inducing drugs in violation of their moral code. Furthermore, Trump’s HHS department is intent on shutting down a government-run HIV study that uses human baby tissue implanted into mice for research.

These examples suggest that Trump, though he doesn’t appear to be overtly religious, is championing social conservatism, often with a Christian tinge, but without broadcasting it. Consider, too, that Trump issued a May 2017 executive order making it easier for churches to take part in politics, effectively “freeing the pulpit”—something most observers thought would never happen.

The Washington Post, a mischievous messenger of the neo-liberal, secular-internationalist world order, given its historical roots in the Federal Reserve System and the shadowy Bilderberg Group world-planning conferences, reported this matter with detectable reluctance:

“The order, Trump said, removes the financial threat faced by tax-exempt churches from the Internal Revenue Service when pastors speak out on behalf of political candidates. But some experts said it amounts to a mostly symbolic gesture with little likelihood of changing how the agency polices the issue,” the Post pouted,

Yet, the Post quoted Trump as tweeting: “For too long the federal government has used the power of the state as a weapon against people of faith, bullying and even punishing Americans for following their religious beliefs.”

FIRING ON THE FED

In the financial realm, Trump in July 2018 began verbally challenging the Federal Reserve over its actual and planned interest-rate hikes, amid news that he has contemplated having more input on how the Federal Reserve Board is constituted. This set off alarm bells in the newsrooms of the mass media cartel, whose writers, while they pose as champions of the people, fretted over Trump not only correctly linking rate hikes to higher prices in the market place—usually a touchy topic in itself—but also over Trump’s unprecedented scrutiny of the Fed’s structure.

Furthermore, in issues both domestic and quasi-foreign, Trump bested his predecessors back to the days of the Korean War by bringing home U.S. soldiers’ bodily remains from North Korea, while also sending Army units to protect America’s border for a change, due to the influx of Central American caravans composed of asylum-seekers and the MS-13 gangsters and cartel operatives who routinely exploit them.

As of this posting Dec. 31, 2018, Trump is laboring to secure funds to fully build a border wall (or “fence,” or “barrier.”). As this writer has reported over the years, tunnels under the border and federal wildlife refuges along the border that limit the Border Patrol’s access—but provide an easy sanctuary for illegal aliens and traffickers—need to be addressed. And surveillance technologies, rather than being trained on America’s heartland, would be best applied at the border to compliment the wall and other measures.

Trump also replaced the NAFTA free-trade scam with a new U.S.-Mexico-Canada trade pact, pardoned former Sheriff Joe Arpaio to support his dedication to border security, pardoned members of the Oregon-based Hammond family in favor of their property rights versus federal power, and cut some business regulations and taxes to rev up the economy—despite some setbacks, such as GM’s announcement of big job cuts.

Conversely, former Treasury official Paul Craig Roberts and others don’t firmly believe Trump is the virtual hero that many believe him to be. Roberts, who served in the Reagan administration, wrote in a September 2018 column:

“As further evidence for [conservative pastor and columnist] Chuck Baldwin’s view, I add [regarding Trump’s UN speech last fall]: There was Trump patting Washington on the back for its good deeds . . . which apparently includes Washington’s destruction [in whole or in part] of eight countries in the last 20 years . . . . The lies that Trump told about Iran and Venezuela are like the lies that Washington told about Serbia, Afghanistan, Iraq, Somalia, Libya, Yemen, Pakistan, and Syria, lies that were used to justify military actions that have destroyed the lives and prospects of millions of peoples. Trump, like his predecessors, sees these crimes against humanity as good deeds because they advance Washington and Israeli interests.”

And while hosts and callers on radio-talk shows, some of the readers of this TRUTH HOUND website and others have wide-ranging views on Trump—from hero, to mixed bag, to the theory that Trump is scoring domestic points simply to win the people’s hearts but will ultimately betray them to the globalists who have him captive—another view is that Trump is actually beating the globalists at their own game, partly by “back-channeling.”

That means he may do something seemingly “senseless” to appease the world establishment, such as his recent refusal to meet Russian leader Vladimir Putin in South America, but then communicate with Putin behind the scenes to ensure that America will avoid a war with Russia (an ally of Iran and Syria) just as Trump promised.

Another back-channeling example may concern Yemen, where the Trump administration is, unfortunately, continuing the brutal Obama-hatched scheme of militarily aiding a Saudi coalition in fighting a pro-Iranian Houthi “insurgency,” which likely is about seizing oil assets. However, we must ask: Is Trump aiding the Saudis so he can apply the “art of the deal” in return, such as securing Saudi Arabia’s help with a peace deal between Israel (a Saudi ally) and the Palestinians?  Perhaps, the year 2019 will bear this out, amid tentative indications that another possible “tit-for-tat” involves Trump arranging for the oil-rich Saudis to pay for the rebuilding of war-torn Syria, as a condition for American military help in Yemen (helping the Saudi coalition to refuel its warplanes and provide targeting assistance).

Also, on the plus side, Trump tweeted triumphantly about the Senate’s 87-12 vote Dec. 18 to pass a sweeping criminal justice bill which addresses concerns that the nation’s war on drugs had imprisoned too many Americans for non-violent crimes. Even the Associated Press conceded that the bill “culminates years of negotiations and gives President Donald Trump a signature policy victory, with the outcome hailed by . . . conservative and liberal advocacy groups. The House is expected to pass the bill. . .”

Moreover, in another matter appealing to some constitutionalists and most liberals, national marijuana decriminalization appears more possible than ever under Trump.

Notably, this article is not intended to be an absolutely complete account of Trump’s performance. And while he may not be big on social graces, as the song goes, his signature Twitter posts have nevertheless put the lying media in its place while mocking the stupid political correctness that seeks to muzzle free speech.

With a Democrat-controlled House about to be seated for the new 116th Congress, 2019 and beyond is going to get ugly but also exceedingly interesting as the Trump era continues and America approaches the great divide: A resurgence of national autonomy and identity? Or a complete surrender to unalloyed globalism?

If, despite the late-2018 federal government “shutdown,” Trump can hold the line and demand that he retain his latest border wall funding (the House on Dec. 19, 2018 approved nearly $6 billion but the Senate may strip the funding), he will have taken another major stride forward in favor of national sovereignty—backstopped by GoFundMe monies being privately raised by supporters for the wall, amounting to $18,509,077 as of Dec. 31, 2018.

COULD IT BE? IS SWAMP-CLEANING IMMINENT?

Perhaps most interesting of all are persistent claims that Trump has “the goods” on the Clintons and thousands of other demented, corrupt political heavyweights and their homies via sealed indictments. Many of us, uncertain about the reality of this claim, are waiting for the proverbial “other shoe to drop” to find out if a major swamp-cleaning, to which Trump long ago alluded in his campaign days, will actually happen. Let’s hope that it does.