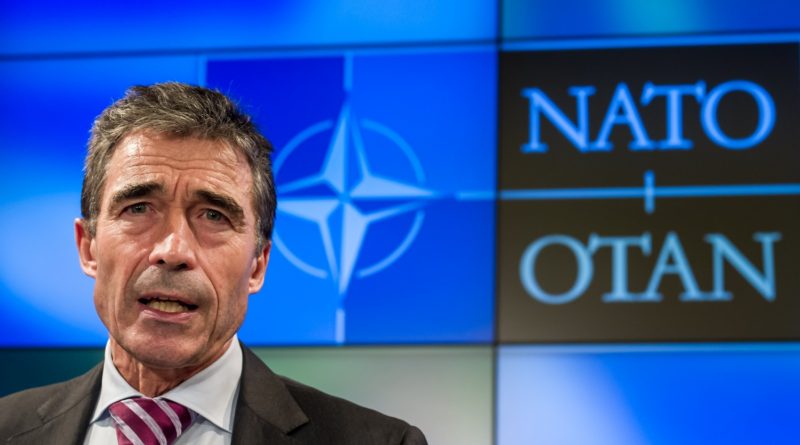 {Directly above, the first of several expected videos on Bilderberg and other topics by STOP THE PRESSES! produced in cooperation with World Impact News; the very top photo is of former NATO Chief Anders Rasmussen, a 2014 Bilderberg participant who’s “advising” the new “NewsGuard” program that “rates” our news.}

While the Bilderberg Group’s annual meetings are important, the networking and developments that go on year-around—which include past or present Bilderberg participants who broadly “cross-pollinate” with those from other globalist organizations—matter just as much, if not more. That’s because this networking is how Bilderberg’s current highly confidential discussions become part of tomorrow’s globalist infrastructure.

One such development with far-reaching consequences is the recent creation of NewsGuard, a rating program designed to valiantly protect us from “fake news.” Another—which appears to have a somewhat more direct Bilderberg linkage—is “ElectionGuard.”

Both should give us pause, given the identities of those behind both projects.

NewsGuard was co-founded by lawyer and activist-journalist Steven Brill and former Wall Street Journal publisher Gordon Crovitz. NewsGuard uses “a team of trained journalists and experienced editors,” according to its website, to rate online news sources, rather than rely on secretive computer algorithms.

This “SWAT team” of staffers compiles detailed profiles, basically dossiers, on each news website in question. NewsGuard’s browser extension is something like a traffic light. It displays red (bad), green (good) or yellow (caution) rating icons, which, when touched by your computer cursor, display website summaries, including NewsGuard’s “nutrition labels.”

The mainstream Capitol Hill journal Politico passed NewsGuard’s probe with flying colors and received a “green” rating. However, RT.com, the former Russia Today that’s partly funded by Russia’s government and is considered by some to be a quasi-alternative news site, received a “red” rating, alleging RT is untrustworthy.

When NewsGuard was launched Aug. 23, 2018, its initial goal was to create reliability ratings for the 2,000 sites responsible for 98% of the news and information shared online in English in the U.S. Over time, NewsGuard plans to provide ratings for the 7,500 most-read news sites and go global in the process.

“Partnering with Microsoft [Editor’s Note: The ubiquitous computer giant represented at Bilderberg most years], NewsGuard is trying to have its rankings installed by default in US public school and university libraries, as well as on smartphones and computers. Hawaii is the first US state to have installed NewsGuard on its public library computers,” a recent RT.com rebuttal noted.

As for ElectionGuard, about one month before the 2019 Bilderberg Meeting happened in Montreux, Switzerland May 30th thru June 2nd, the Associated Press (without citing the Microsoft-Bilderberg connection) reported that Microsoft is entering the “election security” world with the introduction of new open-source software called “ElectionGuard.”

On May 6, Breitbart online picked up on the AP story about ElectionGuard and noted: “The name of the new software seems quite close to Microsoft’s partner NewsGuard, the browser extension bundled with the Microsoft Edge mobile browser that purports to be the [judge] of reliability in media. In practice, NewsGuard has repeatedly verified hoax Russian election tampering stories as “true” [emphasis added] while blacklisting multiple conservative news websites as ‘fake news.’”

While that suggests that NewsGuard is simply a more sophisticated and “respectable-looking” means of discrediting alternative media in this age of Facebook and You Tube arbitrarily shutting down and de-funding websites that these private companies deem “hateful” or “fake,” ElectionGuard’s main spokesman at Microsoft—CEO Satya Nadella—was an actual attendee of Bilderberg 2019, evidently as a first-timer.

Topics at Bilderberg the last couple of years have included “the post-truth world,” “artificial intelligence” and “quantum computing” (all 2018, Italy); and “the ethics of artificial intelligence” and “the weaponization of social media” (2019, Switzerland). The emergence of such topics is due to Bilderberg’s significant “Silicon Valley-social media-big data” pedigree which over the last decade, especially, has included the frequent participation at Bilderberg of Google’s Eric Schmidt (now an Alphabet, Inc. technical adviser); Linked-In’s Reid Hoffman; Palantir Technology’s Alex Karp; and Microsoft’s Bill Gates, as well as Jared Cohen (Jigsaw, Alphabet, Inc.); Craig J. Mundie (former senior adviser to the CEO at Microsoft, now with Mundie and Associates); Mustafa Suleyman (co-founder of Deepmind in London, which pushes the boundaries of Artificial Intelligence); and Metin Sitti, of the Max Planck Institute for Intelligent Systems—along with scores of government officials, many with technical backgrounds, representing intelligence and defense agencies at Bilderberg.

Karp, Mundie and Schmidt also are on Bilderberg’s Steering Committee and help determine the location, topics, funding arrangements and participant’s list for the annual Bildering conference.

ELECTIONS ‘EVERYWHERE IN THE WORLD’?

Given NewsGuard’s obvious bias, the fact that Microsoft also seeks to “modernize all of the election infrastructure everywhere in the world,”  as Nadella himself boasted, should invite heavier-than-ever scrutiny of both ElectionGuard and NewsGuard.

And while both are linked together via their Microsoft connection, does NewsGuard itself have any other “red flags”? If you peruse its Board of Advisors and some of its 18 investors, the answer is yes.

NewsGuard’s 10-member Advisory Board includes former NATO chief Anders Fogh Rasmussen (Bilderberg 2014), the former Danish prime minister who recently founded the Alliance of Democracies Foundation and has a residence in Illinois;  Tom Ridge, the first Department of Homeland Security secretary when the DHS was created in the wake of 9-11; and Ret. Gen. Michael Hayden, the. Bush and Obama-era CIA chief who also formerly headed the National Security Agency (Clinton and G.W. Bush) and served as principal deputy director of National Intelligence (G.W. Bush). In 2017, Hayden became a national security media analyst for ultra-liberal CNN.

Other advisors include: Jimmy Wales, founder of Wikipedia—a widely distrusted online encyclopedia—along with Richard Stengel, a former Time magazine editor who was President Obama’s undersecretary of state for public diplomacy.

NewsGuard will say that its advisors do not get involved in issuing the media ratings, which appears to be largely true, although the advisors clearly set the framework for the editorial staff. Moreover, advisor Richard Sambrook, director of the Center for Journalism at Cardiff University and a former BBC Global News director “provides editing and editorial guidance for NewsGuard’s UK Nutrition Labels,” NewsGuard admits.

But things get more interesting when one examines NewsGuard’s investors, especially the Blue Haven Initiative (BHI), established in 2012. Founders Leslie Pritzker Simmons, heiress to Hyatt Hotels and her husband Ian Simmons, heir to the Erie Canal, serve as co-chairs. The Pritzkers, a highly influential family from Chicago’s Jewish community, are one of America’s wealthiest families according to the well-known Forbes listing and backed Hillary Clinton’s presidential candidacies in 2016 and 2008. Notably, Leslie was known as the actress Leslie (Anne) Matthews during her childhood.

While some of the other investors have more straightforward resumes, several red flags pop up here and there. One investor, the Publicis Groupe, is one of the world’s largest advertising agencies and strongly supports the radical LGBTQ movement in the workplace. And the vast majority of the investors have modernist-liberal-globalist dispositions, raising questions on how traditionally minded populist, conservative, Christian and constitutional news sites will fare under NewsGuard’s watchful eye.

Curiously, the 2014 meeting happened right before the global-cities movement, designed to subtly give municipal officials powers normally reserved to nations, became much more assertive. Adopting foreign policy at the municipal level was specifically but rather quietly discussed in February 2018 at UK’s Chatham House, with Chicago Council President Ivo Daalder in attendance.

The overall global cities movement, best described as “localized globalism”—which is exactly what Katz addressed in an April 2018 Chicago Council program—calls on municipal governments to align with groups like the Global Parliament of Mayors, enabling participating municipalities to network as independently as possible from the nations that they inhabit, in what appears to be an incremental secession to weaken the nation state.

All told, NewsGuard’s editors may be competent, but its well-heeled backers and their cohorts across the globalist grid are likely to be unrelenting in their bias in favor of mainstream news which, ironically, is where the label “fake” most often applies. And if NewsGuard is going to run in parallel with ElectionGuard, the meddlesome developments that are synonymous with Bilderberg will continue to wreak havoc on the freedom and sovereignty of nation states and their inhabitants.