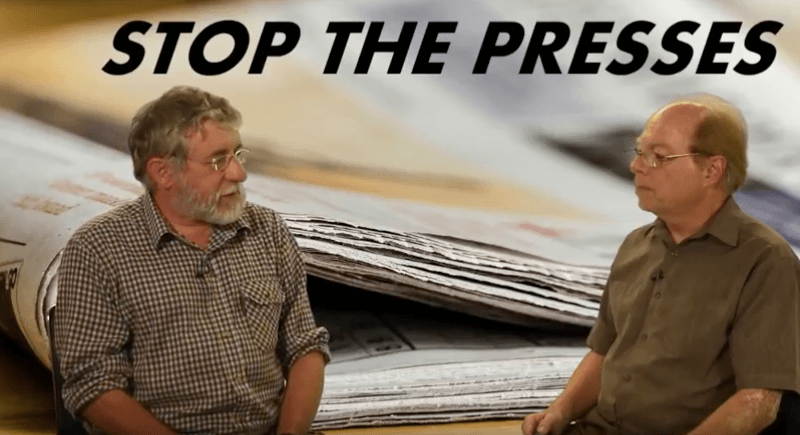 In the early 1980s, Justin Walker (shown at left in above photo with this writer) was an idealistic, hard-working member of the British Green Party when, upon being invited to lunch by an apparent fellow “idealist” who also was a well-connected Fiat Motors executive, he heard firsthand that dire claims of impending environmental doom were being fabricated to deliberately instill widespread insecurity so the overall population could be goaded into world government.

Interestingly, Walker’s uncle by marriage was Sir Harry Pilkington, a participant at the very first Bilderberg meeting in Holland in 1954, representing the Federation of British Industries. Pilkington, who later became Lord Pilkington, “in 1955 became a director of the Bank of England, a position he held until 1972,” Walker told AFP, in an interview just after Bilderberg’s 65th meeting this year in Switzerland.

“My own personal experience has shown me that the Green movement is now totally corrupt and totally without any real solutions or meaning for the human race,” Walker added, while recalling that when he joined the Green movement in 1978, most of the party members tried to be “an anti-party party,” to distance themselves from conventional party politics, in the belief they actually stood for something and would not let the world’s corporate power brokers push them around.

“I was very impressed by that because I was in the Green Party and I felt this is the real way forward for politics,” Walker recalled. “And then I read another book called ‘One Hundred Pages for the Future’ by a man named Aurelio Peccei, who was a senior executive at Fiat Motor Company in Italy—but he also co-founded the Club of Rome—the organization that’s behind most of the elite interests in the environment, including of course man-made global warming.”

Citing the pivotal experience with the Fiat industrialist, Walker continued, “In 1982 I wrote to Aurelio Peccei and he said, ‘Come and see me, have lunch with me.’ And unknown to me, my uncle had also approached him because he knew my uncle. Well, I was having lunch with Peccei and he suddenly offered me a job to go and work as one of his researchers for the Club of Rome. He then said to me—and these were his exact words that I remember so clearly—‘You’ll be joining us at a very exciting time. We are creating a global environmental problem that’s going to frighten people into wanting global government.’”

“At the time,” Walker said, “being a Green politician, I thought this was wonderful. I didn’t know the facts about Bilderberg, because this was before [British conspiracy researcher] David Icke [also a former Green Party member] started doing his research and other people started doing their research, to show that there’s a hidden tier of government above our elected governments.”

Walker confessed: “I considered going to work for Peccei for about a week. But I worked for my father at the time. And I was in the Territorial Army and had just been [promoted] to Captain. I had a new girlfriend. And I was in the Green Party and thought I was going to get elected to Parliament.”

Lord Pilkington, of Pilkington glass fame, died the next year in 1983 and Peccei died in 1984. Pilkington late in his life would tell Walker not to believe the press because “we control it,” referring to the Bilderberg clique. And soon the independent researchers who found increasing evidence of a hidden tier of government that regulated the political process convinced Walker that declining the job was the right decision. Nowadays, Walker leads the New Chartist Movement to mainly focus on denying the banking power its illicit control of the medium of exchange.

“My main interest is the money supply and the fact that how much money the world has to spend is dependent on a handful of private individuals and dynastic families, stemming to this one organization, the Bank for International Settlements [the central bank of the central banks in Basel, Switzerland, thought to be the ultimate banking nerve center].”

As Walker sees it, the banking elite are party to carrying out Peccei’s formula to this day, which includes enlisting and exploiting impressionable, vulnerable youths like Sweden’s Greta Thunberg—a 15-year-old Asperger’s Syndrome sufferer who attended the January 2019 Bilderberg-connected World Economic Forum conference.

So, Thunberg, wittingly or not, evidently is following the lead of British “extinction rebellion” co-founder and “Green New Deal” advocate Gail Bradbrook. Under the “extinction rebellion” banner, Bradbrook, as Walker sees it, is touting the “climate change” claim birthed by the hidden tier of government to fasten heavy controls on society (especially rural life), drive people into cities under the Global Cities movement, depopulate the world and maintain the elite’s financial hegemony well into the future—in accordance with the UN’s Agenda 2030.