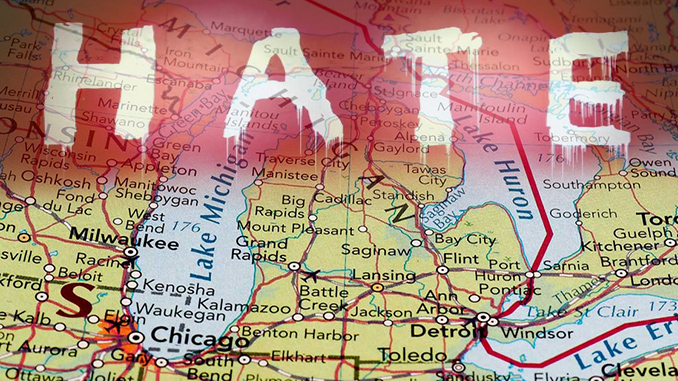 Elected in 2018, Michigan Attorney Gen. Dana Nessel (D) has put together a “hate crimes unit” that is compiling data on those accused of committing so-called hate crimes against “the LGBTQ community” as it’s commonly called. And she’s heavily relying on the discredited Southern Poverty Law Center (SPLC) to help her office define which groups are “hate” groups. The intent, according to both government and media sources, is to increase the documentation and prosecution of hate crimes while also targeting “incidents” of hate.

“These groups range in the ideological extremes from anti-Muslim, to anti-LGBT, to black nationalist and white nationalists,” Michigan Department of Civil Rights Director Agustin Arbula said in an official statement, which added that the lower peninsula’s “thumb” area is seen as a hotbed of supposed hate.

Particularly of concern, over one half of the [31] identified groups are located east of U.S.-23 between Flint and Ann Arbor,” Arbula specified.

Yet, this crusade goes even further. Arbula’s department, in coordination with the attorney general’s office, is going so far as to create “a process to document hate and bias incidents that don’t rise to the level of a crime or civil infraction,” as noted in the Detroit News.

In other words, something as harmless as philosophically or politically disagreeing with certain “minority” groups deemed worthy of extra protection by the state—even though all Americans, including Christians, conservatives, patriots, nationalists etc. are entitled to equal protection of the law—is being monitored and logged.

This means that Michigan is basically trying to discredit and potentially criminalize certain beliefs—primarily if not solely conservative-constitutionalist-Christian beliefs. In due course, this could conceivably result in a “thought crimes” dragnet, despite Ms. Nessel’s denials that such a thing could happen.

The SPLC—whose scandal-ridden founder, Morris Dees, was recently fired and whose overall leadership is mired in corruption—claims Michigan, in total, has 31 hate and extremist organizations—which is “an uptick from the 28 [the SPLC] reported in 2017,” also according to the Detroit News.

Meanwhile, mainline conservative publications such as the National Review have noted that even the progressive left is turning on the SPLC.

Ms. Nessel’s office, which has been questioned by state lawmakers concerned that identifying “hate speech,” “hate groups” and “hate crimes” is a highly imprecise, subjective undertaking and that the SPLC is not a reliable source to aid in the process, announced that “active hate and extremist groups in Michigan” from 2017 to 2018 had increased “by more than 6 percent.”

Two of the 31 accused Michigan groups are the American Freedom Law Center in Ann Arbor, accused of being anti-Muslim; and the Church Militant/St. Michael’s Media in Ferndale, labeled as being supposedly “hateful” of LGBTQ people.

In correspondence with this website which runs a Facebook page [see The Truth Hound / STOP THE PRESSES!], St. Michael’s Media spokesperson Christine Niles responded: “Church Militant categorically rejects the label of ‘hate group’ imposed by the Southern Poverty Law Center, a radical leftist outfit whose aim seems to have morphed into attacking pro-life, pro-family organizations. We are deeply concerned that the Michigan attorney general’s office is launching its hate crimes task force using the SPLC’s list to investigate groups like ours.”

In a news release, the American Freedom Law Center announced it has filed a civil rights lawsuit “accusing Michigan of roundabout discrimination” in this matter. The law center is “going after Michigan Attorney General Dana Nessel and state Department of Civil Rights Director Agustin Arbulu” because they are “waging an unjust crusade against the law center.”

Michigan, adds the complaint, “is unfairly targeting the law center due to its inclusion on the Southern Poverty Law Center’s list of local hate groups.”

Notably, the center says its mission “is to fight for faith and freedom through litigation, education, and public policy programs. The strength of our Nation lies in its commitment to a Judeo-Christian heritage and moral foundation and to an enduring faith and trust in God and His Providence.”

Other groups among the 31, according to the SPLC, are: American Guard (statewide, “general hate”); The Creativity Movement (statewide, “Neo Nazi”); the Daily Stormer (statewide, “Neo-Nazi”); and the Foundation for the Marketplace of Ideas (Clinton Township, “White Nationalist”).