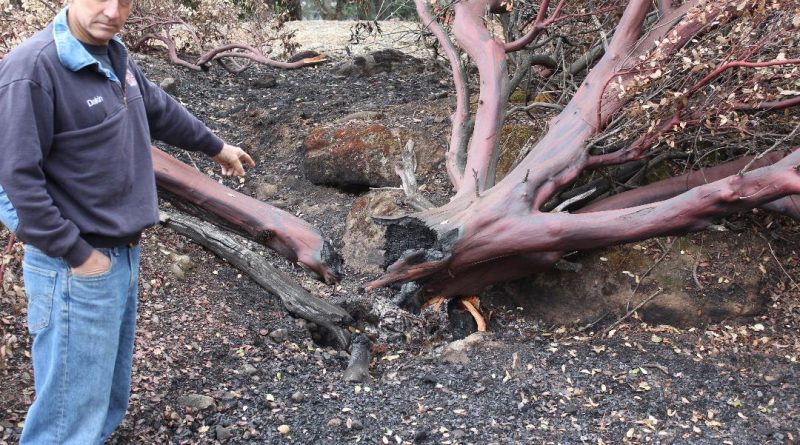 Recently retired Fire Captain Matt Dakin is shown in the above photo with a manzanita tree that oddly burned at the bottom on the inside with the outer part of the tree unaffected during a recent California fire.

Dakin, who served in the San Ramon Valley Fire Protection District and several other fire units for over 30 years, does not hesitate when he insists that the wildfires that have been raging and ruining California are, for the most part, not conventional fires at all.

At an absolute minimum, he said, “the authorities have been standing down” in some instances, thereby allowing the fires to worsen and spread unprecedented destruction and death. Known cloud-seeding technologies that could have been applied to bring rain in time to dampen the fires have been completely ignored, he told STP.

“They had Operation Popeye, now declassified, way back in Vietnam, seeding the clouds [with special flares] to make it rain on the Ho Chi Minh Trail to slow down North Vietnam’s military advances,” Dakin told this writer, a fact that this writer had confirmed at December 2016 Freedom Force International conference in Arizona that included talks on weather modification and weaponization.

Notably, see the entry for climate investigator Jim Lee, who spoke at that 2016 conference on
“Geoengineering, Weather Modification, and the Weaponization of Nature” at this website. He revealed the documents that confirm Operation Popeye and several other weather modification studies and schemes. [And an informative video and much more by Lee can be accessed through this link; it shows “10 technologies to own the weather today” and calls for putting an end to weather experiments that are frequently carried out without public knowledge or input. Moreover, see the You Tube video below to go directly to Mr. Lee’s well-documented overview of the history and technology behind weather/climate alteration. This does not necessarily prove a connection to the California fires, but it provides a solid context for more deeply probing what’s behind at least some of those frequent and devastating blazes—Editor]

In conversing with Dakin, this STP editor also shared with him the experience of attending a January 2018 American Meteorological Society conference in Austin, Texas where the assembled weather forecasters and analysts openly spoke about cloud-seeding and other weather-modification applications.

Another bizarre circumstance in California came about when the most recent “Kincaid Fire,” as it’s known, came within a mile or so of Dakin’s Sonoma County home amid warnings of high winds—the infamous Santa Anna winds—coming to the area in a couple days, a situation that should’ve have prompted authorities to seize the window of opportunity ahead of the coming winds and fight the fire to keep it from spreading.

But that crucial advance firefighting never happened, said Dakin, who, on Oct. 25, 2019, could see the fires over a ridge, with the smell of smoke worsening by the moment. “A news crew was prevented from entering the area in their van, which I feel happened to prevent them from seeing that the fire was not being fought while there was still time,” Dakin said.

Dakin noted other strange phenomena related to these fires:

In the 2018 “camp fire” that totally destroyed the city of Paradise in Butte County—which with unprecedented speed and fury killed at least 86 people and destroyed some 19,000 structures, 14,000 of which were homes—various trees and manzanita bushes appeared to have burned from the inside out, even including individual trees that were isolated in asphalt parking lots away from the main fires. Oftentimes, the strange internal fires would start at the bottom, seemingly from the inside of the roots.

So, what’s going on here?

“One of the things that worries me the most is the weaponization of the weather, but nobody talks about it,” Dakin said, adding that apparent aerosol injections in the atmosphere, resulting in what many call “chemtrails,” need to be further investigated just as alleged clandestine weather alteration needs to be further probed.

“I’m speculating but this stuff points to a lot of good information I have,” Dakin said of these possible causes, while adding that the normal hydrological cycle is interrupted via atmospheric spraying, which completely dries everything out and turns it into a tinderbox.

“And then they blame it on climate change. It’s maddening,” he said.

Furthermore, Dakin dares to say that even the application of directed-energy weapons in an illicit operation to drive Californians off their land, perhaps to “re-wild” the countryside and prepare for United Nations Agenda 21 or Agenda 2030, should be considered a strong possibility.

“I’d like someone to explain that if it’s not directed energy, what causes fence posts to burn only where the metal touches them and these weird internal tree fires. Since I was 18 years old, for my whole career, fires were normal and pretty predictable. But now we have cars inexplicably turned over and countless other anomalies.”