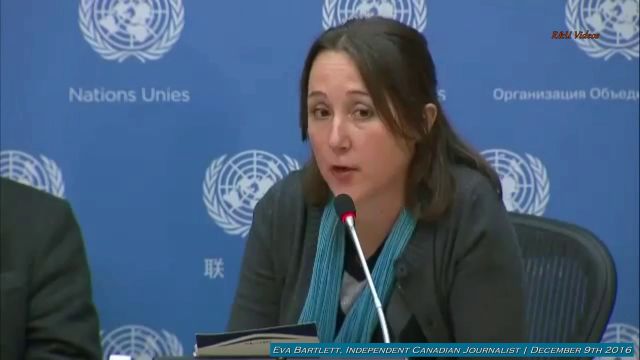 In this vitally important video (scroll down directly below this short 5-paragraph article) from a United Nations Dec. 9, 2016 press conference, independent self-funded Canadian journalist Eva Bartlett (who, like UK-based independent journalist Vanessa Beeley, has spent considerable time on the ground in Syria) tells a drastically different story about Syria than we hear from the orthodox press.

Ms. Bartlett has talked to everyday Syrians and closely witnessed various events and developments, including deadly attacks carried out by terrorist factions that appear to have Western backing, even while the vast majority of conventional corporate media, she maintains, engage in a series of nonstop lies that amount to a vast deadly deception,  thereby perpetuating the death and suffering of the long-besieged Syrian people.

Incredibly, the actual, long-awaited liberation of much of the Syrian city of Aleppo finally happened after terrible suffering on the part of the Syrian people, thanks to Syria’s government and military with Russian assistance—despite the fact that corporate Western media (U.S., UK, Canadian, European) wrongly (and apparently intentionally) portray Syria’s leadership as the real villains, as Ms. Bartlett says.

This cannot be overemphasized: Aleppo has been largely liberated and the nimrods in the “kept press” are not reporting it. Instead, they prattle on and on about ceasefires designed to get Syrian forces to stop defending their own country, without regard for the fact that the terrorists that the media pass off as “the resistance” aren’t going to observe a “ceasefire.”

See this video for yourself and you decide. By all indications, Ms. Bartlett exposes the hand of the “Weaponized Media” that’s operating today, owned by large corporate interests interlocked with “deep state” government insiders who will do anything to maintain power and profits.

This kind of media, clearly, is never going to “speak truth to power” because it’s part of the very power structure it claims to monitor. So, such a media simply does not and CANNOT work in the true interests of the people and their well-being and freedoms. Such a media must be replaced. 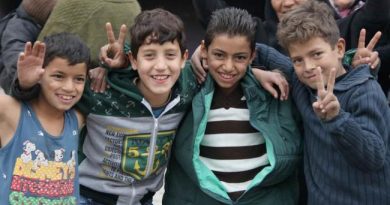 One thought on “CANADIAN JOURNALIST EVA BARTLETT: Corporate Media is Accomplice in Mass Murder in Syria”