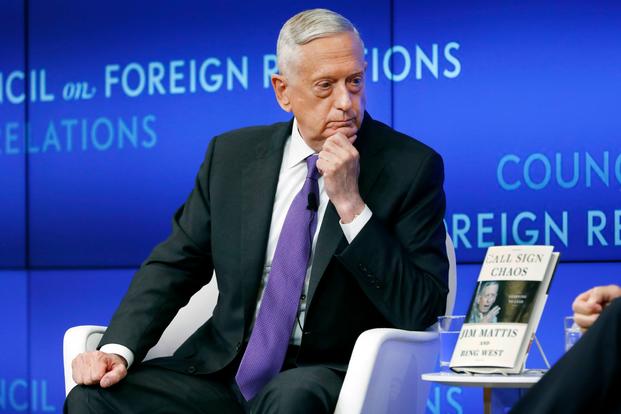 Biden more fully bared his globalist soul as well, via the

CFR’s infamous journal, back in the spring of 2020

With January 2021 upon us as of this writing, it’s important to consider the anniversary of the transformation of retired four-star General and former Secretary of Defense Jim “Mad Dog” Mattis, who was publicly named to that position by President Trump as of the 45th president’s  inaugural Jan. 20, 2017 but resigned in January 2019. However, Mattis didn’t leave the top defense post that month just to enjoy hearth and home; rather, he evidently has been “born again” ideologically speaking, and therefore he has never looked back in his quest to cast aside his former boss’s  nationalist perspective and fervently preach the gilded gospel of internationalism, with a little help from some globalist friends.

His new devotion saw him address the Chicago Council on Global Affairs (CCGA) on Sept. 11, 2019 when he earned the privilege from one of the nation’s oldest think tanks to speak (and promote his new book) at its first-ever Lester Crown Distinguished Lecture on U.S. Foreign Policy, named for the 95-year-old billionaire son of Henry Crown, founder of the big-ticket defense contractor General Dynamics.

Soon, Mattis, an apparent believer in the fraud-ridden 2020 presidential election’s outcome, exchanged his sidesword for a pen and co-wrote an article for the esteemed Foreign Affairs journal of the Council on Foreign Relations in New York, which was founded in 1921, one year before the Chicago Council on Foreign Relations—renamed the CCGA—was established. Mattis and co-writers Kori Schake of the American Enterprise Institute, Jim Ellis, a CFR fellow and editor, and Joe Felter of the Hoover Institution, presumed to put the final nail in the coffin of the Trump presidency by declaring Trump’s “America First” foreign policy a dead letter and urging “president-elect” Joe Biden to rid the world of any last vestige of such a deplorable nationalist framework.

As these scurrilous scribblers noted in the latest Foreign Affairs edition: “In January, when President Joe Biden and his national security team begin to reevaluate U.S. foreign policy, we hope they will quickly revise the national security strategy to eliminate “America first” from its contents, restoring in its place the commitment to cooperative security that has served the United States so well for decades.”

The obvious mission of these writers is to make the case for restoring American foreign policy to a pre-Trump basis. That means making sure the U.S. continues to be the global police that must carry most of the weight financially and in terms of troop commitments—according to the globalist “status quo” that’s been in place for over 70 years, starting at the 1944 Bretton Woods, N.H. conference—which laid the cornerstone of the post-war “rules based” world order. As CFR president Richard Haass in 2018 told the British House of Lords, and as many other one-world apparatchiks have preached nonstop, President Trump’s call for better financial burden-sharing among NATO members, his insistence that the U.S. military should no longer automatically intervene in every would-be conflict and his eventual move to enact serious troop draw-downs in Afghanistan and Iraq—along with his avoidance of any large scale military action since 2017—is not exactly what the “one-worlders” have had in mind, broadly speaking.

Mattis and company couched it this way in their Foreign Affairs piece:

The United States today is undermining the foundations of an international order manifestly advantageous to U.S. interests, reflecting a basic ignorance of the extent to which both robust alliances and international institutions provide vital strategic depth. . . . . The best strategy for ensuring safety and prosperity is to buttress American military strength with enhanced civilian tools and a restored network of solid alliances . . .”

And, lo and behold, Joe Biden himself, although he likely received assistance, by-lined a Foreign Affairs piece for its March-April 2020 edition, in which he rambled:

By nearly every measure, the credibility and influence of the United States in the world have diminished since President Barack Obama and I left office on January 20, 2017. President Donald Trump has belittled, undermined, and in some cases abandoned U.S. allies and partners . . . . He has emboldened our adversaries and squandered our leverage to contend with national security challenges from North Korea to Iran, from Syria to Afghanistan to Venezuela . . . . He has launched ill-advised trade wars . . . .  He has abdicated American leadership in mobilizing collective action to meet new threats, especially those unique to this century.”

However, “ill-advised trade wars” could also be seen as Trump finally standing up to a clever adversary, China, and ensuring that the U.S. properly protects its industrial base via sufficient tariffs while finally reducing the enormous trade surpluses China has leveraged against the U.S. to build its military, even while Trump’s new trade arrangements put badly needed tariff revenue into the U.S. Treasury. And if getting allies to pay a larger share of troops and treasure is “abandoning” them, then so be it.

Ironically, Trump has never moved to be an absolute “isolationist” in the first place, as the CFR cabal wrongly claims. The U.S. still commands the airways and sea lanes and works with allies. But for those in the CFR’s orbit, including Mr. Mattis and Mr. Biden, the world model of the globalists cannot permit even the slightest “heresy” to logjam its path to an enduring unipolar rule from behind the throne.