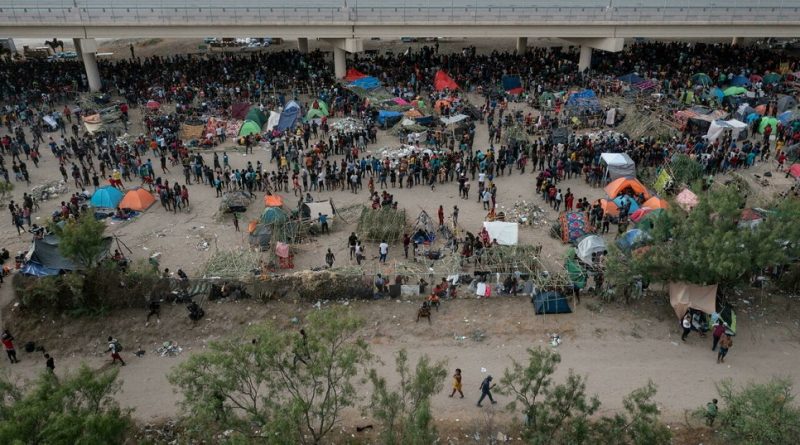 While the federal government appears to be at war with several states, targeting the very idea of state security and sovereignty—which manifests itself with regards to covid policies but is especially egregious when it comes to border and immigration policies—Texas arguably is in the federal government’s crosshairs more than any other state.

BREAKING NEWS BULLETIN: Wyatt Watson, a district director of the Texas Nationalist Movement, or TNM, which advocates Texas nationhood, is among the multiple-thousands of proud Texans who’ve been feeling extreme disgust at the whole spectacle of Biden and his internationalist brigands attacking Texas from multiple angles. He feels that the federal government is literally waging war against Texas.

He told STP that TNM is planning to provide a huge barbecue for Border Patrol agents and other hardworking public servants on the front lines of the border breach on Nov. 6 near the embattled city of Del Rio, where tens of thousands of illegal entrants are encamped under a bridge, thanks largely to the Biden regime’s shameless dereliction of its border-defense duties.

Even before that, on Oct. 9, a special “Split Reign Trail Ride” is to be held, during which hundreds of ranchers and other horse riders are expected to converge on Del Rio and carry out a procession in solidarity with mounted Border Patrol agents falsely accused of “whipping” illegal border-crossers with their reigns.

This is not to say that Texans are wholly satisfied with Gov. Greg Abbott. Many feel the two-term governor and former Texas attorney general is still more interested in his political career, such as seeking a third term as governor, than in genuinely serving the people (you’d think the two would go hand-in-hand). The concern is that Abbott will talk a good talk but, for some reason, the need for Texas itself—absent federal action—to close its own border with Mexico, not simply “manage” the border, never comes to fruition even though that closing it, due to the sheer enormity of a border breach that has been going on for months with no end in sight, is really the only immediate option.

On a recent broadcast of this writer’s RBN radio show, “STOP THE PRESSES!” this writer and assistant host and engineer Ron Avery wondered why Abbott doesn’t simply call up large units of the Texas State Guard and lay down the law to any would-be illegal border-crossers by physically repelling them with a sufficient show of measured force. In the long run nothing could be more humane than stopping the breach, restoring order and focusing on the circumstances (and smugglers)—and addressing the problems—that bring Haitians and people of so many other nationalities to the U.S. in the first place. In some cases past U.S. policies themselves, especially concerning financial and political meddling that have impoverished Haiti, going back at least as far as the Clinton White House concerning that island nation, may have gravely harmed several of these countries of origin of the illegal border-crossers.

IT’S NOT ONLY ABOUT THE SOUTHERN BORDER

Nevertheless, whether it’s Texas’s passage of a new “heartbeat” abortion law in the biggest pushback against Roe V. Wade to date, or whether it’s the Lone Star State’s just-enacted attempts to build its own border wall sections due to the federal government flouting its duty to secure the border, Washington, joined by the mass media cartel and other belligerents, appears to view the nation’s largest contiguous state as an outright adversary.

Meanwhile, the covid and border issues, of course, collide when one considers how militant Biden is in wanting to exceed his authority to get Americans vaccinated, yet the administration ignores the authority it does have to fully secure the border.

Instead, like the ancient Roman republic in its declining days, it has opened the floodgates to scores of unknown criminals who blend in with tens of thousands of individuals and families that may or may not be fleeing actual persecution in the home countries but are known to oftentimes bring communicable illnesses with them.

And with some 20,000 more people described as “Haitians” reportedly gathering in Colombia for a planned excursion to the Texas border, with nearly 20,000 Haitians and others living in utter squalor under a Del Rio, Texas border bridge and with about 200,000 people from scores of countries illegally traipsing into the U.S., largely via Texas, every month in recent months—quickly heading toward the 1 million mark for 2021—the federal government’s refusal to do anything of sufficient scope to counter the problem comes across as a staggering dereliction of its clear constitutional duty to repel invasions. (See photo above of Del Rio encampment; photo credit: Daily Sun)

HORDES INTO THE HEARTLAND

Appearing on Sean Hannity’s Fox show, Judd characterized Biden as an enemy of the U.S.

“If Biden wasn’t president, I’d arrest him for aiding and abetting [the invasion of the U.S. by enabling the cartels via open border policies to carry on their operations],” Judd flatly stated, while noting he’s been patrolling the border since the Clinton administration’s days. And while the border situation was best under Trump—when border incursions were at a 25-year low—they’re now at an all-time high because “Biden completely dismantled all [Trump’s] policies,” even while Border Patrol agents “who put on their uniforms because we care about the American public” are being “vilified” by Biden.

According to Arizona Attorney Gen. Mark Brnovich, “The president won’t even follow existing law,” regarding his key constitutional duties, including the laws concerning the border. “The president is at the apex of power over such matters, but he turned over Afghanistan to the Taliban and now he’s ceding control over the border to the cartels. He doesn’t have the authority to mandate vaccines but he does have the authority to enforce our laws, especially at the border.”

And while Brnovich filed suit against the Biden regime to try and resume the federal border wall construction that Biden cancelled during his very first day in office, he stated he also is taking legal action to resume the “remain in Mexico” asylum-application process.

40-50 percent of Border Patrol agents in the sectors we visited have been reassigned to process asylum seekers—essentially to do paperwork. Cameras in the Laredo sector cover only a small fraction of their assigned territory. On a night tour of hot spots along the river, we found constant cartel traffic that overwhelmed the undermanned Border Patrol. Cartel/smuggler fees just for migrants crossing in the Rio Grande Valley Sector [a four-county Texas region in the deep south] are estimated at about $80 million each week. The Border Patrol’s budget in that sector is around $13 million per year. There is no way to compete with that kind of funding mismatch [emphasis in original].”

All told, Joe Biden—under the most liberal policies imaginable—operates on the premise that those illegally entering the U.S. are completely clean, honest and trustworthy in terms of their backgrounds, status and intentions. But as this AFP writer has learned while living for 14 years near the border, this air-headed worldview only serves to further incentivize the cartels to extort even more families to head toward the border, in order to keep people and drugs freely flowing into the U.S.  This is not humanitarianism, despite the soothing but wildly misguided claims of Catholic charities and “woke” politicians.

The criminal elements could have no greater ally than a federal government that has embraced internationalism as its guiding credo. Internationalism, constantly portrayed as a benevolent political philosophy when compared against the supposed “evils” of nationalism, actually is a demeaning, coercive and often violent ideology that is based on economic and military interventionism by powerful nations against weak ones and always seeks to sell out the heritage and culture of various peoples to force them into a global village. National borders are an impediment to such delusional ambitions.

Rep. Cloud noted: “The Border Czar [DHS Sec. Alejandro Mayorkas] has essentially aided and abetted cartels for months by avoiding the issue and dodging questions, rather than defending our nation and its laws.”