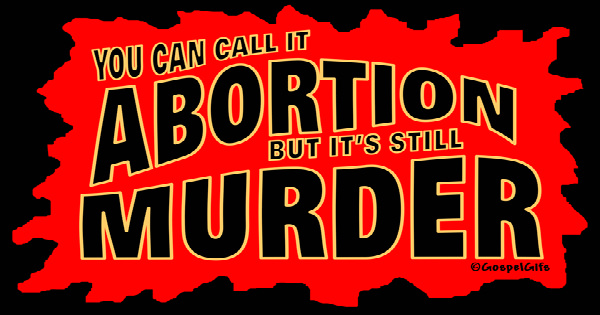 This essay is derived from a chapter in the TRUTH HOUND’S upcoming book: “Weaponized Media.”

In an age of hyper-individualism, where the idea of a social contract and concordance among people for the common good is in steep decline, saying “no” to the undisciplined pursuit of perceived individual “rights” and personal convenience is profoundly difficult. Indeed, “free will” can be stubborn, sometimes criminally so.

Nowhere is this more evident than in the “abortion” debate. Every word associated with it is loaded.

To “abort” means to bring something to a premature end, like aborting a mission due to a problem that arose. But that neutral-sounding word utterly fails to describe what happens to a child in the womb when it’s murdered via violent dismemberment—a “choice” of the mother, so how dare you object—and that obfuscation of language is on purpose.

Precise language is a very menacing thing (but fuzzy language is a powerful weapon) to the Powers-That-Be who want to actively and significantly reduce the population right here, right now. That’s why the “PTB” must own the media and weaponize it.

Who needs armies to subdue and control a population when you “own” words and the means of their transmission, which supplements the ultimate societal control realized by creating money as interest-bearing debt, instead of ensuring its debt-free creation in a manner that matches consumption with production and makes the economic wheel turn properly, thereby making the raising of families a natural affair.

Such a system of media-induced control cannot let precise language take hold. So, pro-life people are called “anti-abortion,” portrayed as “intolerables” or “deplorables” who oppose “women’s reproductive rights,” as if anyone has a “right to choose” to literally end the life of another (which practically speaking only applies to self-defense against, say, an intruder breaking into one’s home).

Above all, what the media simply cannot permit is a probe into the concept of “choice,” let alone its stated application of legally allowing a mother to “choose” to have her child killed insider of her. That’s because of one simple axiom: Not every action is justified just because you choose it. If I choose to kick my uncle out of a moving car, is that OK? If I “choose” to take my own life, is that OK? Actually, it’s not OK.

Just because I “feel” like it’s somehow justified, to take my own life is to totally disregard others who care for me as well as higher moral realities. Choice be damned. There is more to me, than me. I have a Creator, whether I “choose” to accept it or not. So, I don’t “own” myself, or anyone else, in the absolute sense.

You can see how this “choice” thing plays out. Once it’s deeply embedded, women think they not only “own” “their” bodies, they then advance to “owning” the “fetus” inside of them to the point where they become the arbiters of life itself, believing in the devilry that they can personally decree that the “fetus” must die, based on circumstances that may seem dire one day, yet may soon improve.

Fetus,” akin to a meaningless blob of tissue, is the mandated cover word for a human being. However, a child, according to south Texas MD Lawrence Gelman, is born at conception. Think about this. ‘Birth,’ strictly speaking, means when something first comes into existence. But we call the child’s departure from the womb ‘birth.’ Not so. Leaving the womb, as Dr. Gelman told this writer, is only ‘delivery’ from one physical place to another. Thus, the first manifestation of existence is—and can only be—conception.”

And as Notre Dame Law Professor Emeritus Charles Rice told me in extended discussions, there are people who evidently don’t realize that the person growing inside the womb is the offspring of human parents. “What do people think that offspring is, a giraffe . . . an orange?” Rice asked, as we pondered the refusal of people to face even the most basic realities.

That flight from reality was certainly on display at the anti-Trump, anti-life March of Deluded Women Jan. 21 in Washington D.C., the day after Trump’s inauguration. They made it clear that no man (or woman who thinks womanhood consists of treating men like valid partners and bearing children) is going to tell them what to do with “their” bodies and the undefended bodies of children born, properly defined, at conception.

Furthermore, so-called patriots need to keep something in mind, as well. Many fret and warn that “someday,” in the New World Order’s “End Game,” we might all be executed in FEMA camps due to a “coming” world tyranny. But the actual world tyranny, busily twisting the minds of women via radical feminism, is a real thing—right here, right now—which has harnessed the total brainwashing of women and used them as disposable foot soldiers to rid the world of some 60 million human beings (in the U.S. alone) since the underhanded sabotage of the social contract known as the Roe V. Wade U.S. Supreme Court “ruling” in 1973.

That was the “landmark decision” in the high-sounding words of the weaponized media, a decision that advanced “reproductive rights” via “legalized abortion”—consummating women’s ballyhooed “right to choose.”

Sixty million, notably, is about twice the current population of Canada. It’s like having a 9/11 each and every day. But do the nations typically list “abortion” as the top cause of death in official statistics? Of course not. (An occasional exception: Sometimes when a pregnant woman dies in a car wreck, the police will record two deaths).

The nations have thus decreed that until a person in a mother’s womb reaches a certain stage of development, they are not even “people.” So, in the eyes of the law, no one is there to die. Ergo, no one dies. And even if an especially hideous partial-birth “abortion” happens, no one with a name died. Every slain child is literally written off as if they never existed. Thus, every “aborted” child dies twice, if you will. Ladies and gentlemen, Satan is showing his face for all to see, supported by failed, weaponized law that dooms the very people it’s supposed to protect.

Through the constant repetition of its putrid pap, the orthodox press—as if it were using a form of Chinese water torture—word by word gradually assaults the moral sense, reducing the decision of whether the most defenseless human beings live or die to a purely utilitarian consideration, often based in the immediate sense on the perceived situation of the mother (I cannot afford to keep the child, so I won’t) and based long-term on the noxious Roe V. Wade “ruling” that simply sought to invalidate state laws that prohibited abortion. It didn’t directly “legalize” anything.

To be sure, the Rockefeller-funded efforts to kick women out of the home and force most of them to work and pay taxes (while many women say they love the “choice” of having a career) needs to be fully exposed and countered with effective actions to restore the home, so young women don’t make snap economic decisions to take their child’s life.

And a dividend-based economic system (society is starved of purchasing power in an age of increasing automation) would pay the people sufficient regular allowances to significantly supplement work income, ideally based on a social credit approach (see www.socred.org for important details). That approach would go a long way toward ending the forced “work state” while improving the lot of young women as well as men who need their ability to be husbands and providers assured. A more moral system starts with morally aware economics.

But, in the legal realm, what have we become when we allow (and when we blithely believe) that a single court decision on a single case can decide the fate of newborn people basically forever? In my reasonably informed opinion, Roe V. Wade was the law of the case, not the law of the land. While this article is not focused on this angle, part of the problem, clearly, is the over-fixation on case law, where we assume that because a certain case has certain factors, those factors speak for all people, at all times.

Plaintiff “Roe” later became pro-life anyway but, early on, she was maneuvered into the case by radical activists spouting Planned Parenthood founder Margaret Sanger’s murderous ideology to reduce the population, especially minority populations. (Memo to minority women at the D.C. march: That’s why so many PP clinics are in minority neighborhoods).

The very existence of Roe V. Wade stems from a radical act of war on the social order, as the late former abortionist Dr. Bernard Nathanson, who as an activist helped set the stage for Roe V. Wade, confessed before his passing. As the years passed, he found his soul and was profoundly saddened by all the abortions he performed and by his legal actions. He lived a tortured existence while struggling to repent in his final days.

An awakening of that sort is better late than never. But when will society as a whole have a similar awakening? If new President Donald Trump’s initial pro-life actions signal something more, that’s a welcome thing. But when, and how, will we return to the higher moral plane that we must reach?

Hard to say. But now is a pivotal time to start trying.