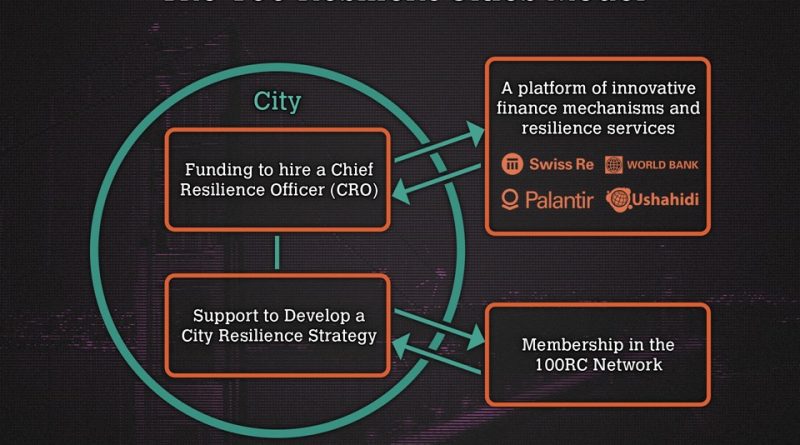 CHICAGO, Ill.—Various think-tanks here and abroad in symbiosis with the Bilderberg Group and other top-tier globalist planners are hyper-deepening their quest to localize globalism and fully integrate public and private authority—a striking case in point being the Feb. 14 unveiling of the “Resilient Chicago” plan—covered here as an exclusive.

The plan is in key respects an outgrowth of the North American Climate Summit in Chicago held in December of 2017. That summit, the first of its kind held by the Global Covenant of Mayors for Climate & Energy—an EU-created entity presided over by American mountebank and former New York Mayor Michael Bloomberg—produced the Chicago Climate Charter, which aligns with the ongoing “global cities” movement.

Chicago Mayor Rahm Emanuel also signed an Executive Order at that time, committing largely unwitting Chicagoans to the goals of the 2015 Paris Agreement, not only as pushback against President Trump for backing the U.S. out of that pact in mid-2017—but also because, under the global-cities rubric, the nation-state itself is being constantly marginalized as participating mayors unconstitutionally act as international ambassadors. The grand deception is that, with several nation states shunning full-bore world government in the current populist uprising, the institutional structures, personnel and ideology of global governance can be marshaled in through the back door, via cities, states and regions.

The intensification of that approach is being accented with a new trend, in which “climate change,” rather than being the overriding issue, is now regarded as one of a plethora of issues eyed for inclusion in the growing grassroots-globalism grid.

That became strikingly apparent when Emanuel, who has molded Chicago into one of the world’s premier “global cities,” appeared before the Chicago Council on Global Affairs (CCGA) on Valentine’s Day 2019 to christen “Resilient Chicago,” while portraying it as irrepressible.

Chicago is partnering with 100 Resilient Cities (100RC), an organization pioneered by the Rockefeller Foundation whose core goal is the development of 100 resilient cities around the world of which Chicago is the 50th. Notably, 100RC assists cities in becoming more resilient to an array of “social, economic, and physical” challenges, largely through funding a Chief Resilience Officer—a kind of “commissar” in each participating city—to lead the resilience efforts.

And judging by the comments of “stakeholders” who attended Resilient Chicago’s launch in the Windy City, several existing localized efforts to revamp and revitalize Chicago, rather than being left alone to rise or fall by their own merits, will be collectivized and inserted into a larger framework to strengthen the city’s “resilience.”

After noting that this master plan will mean that “no Chicagoan will be left behind,” 100RC President Michael Berkowitz reinforced Emanuel’s comments by noting that the 100RC-Resilient Chicago partnership calls for looking well beyond the staple issue of climate change. Berkowitz, who was New York City’s deputy commissioner of emergency management from 1998-2005, remarked: “The capacity of a city that helps it survive a disaster [man-made, such as pollution or terrorism; or natural, such as severe weather] is really what resilience is all about.”

But he clarified that “poverty, poor public health and lack of adequate infrastructure” represent “slow-burning” issues that affect cities daily, and therefore also need attention. And it is here where the proverbial devil is in the details.

“Resilient Chicago takes a deep dive into these challenges, such as equity and limited social mobility” and seeks to build a city with “inclusion for all and interconnectedness,” Berkowitz continued, while adding: “It’s essential to break down ‘silos’ that prevent collaboration within and between government and communities.”

Besides “inclusion” being code for embracing radical social progressivism such as transgenderism and LGBTQ political agitation—that cryptic “silos” remark is ultimately about blurring or erasing the lines between separate and distinct (“siloed”) institutions in the public and private sectors. The idea, alluded to at the Feb. 14 CCGA program, is to create a more unified and monolithic governance-business-social support structure and diminish the relative independence of universities, medical systems, sports organizations, insurance systems, etc. in order to merge their most essential functions into a collective hub.

The CCGA program where Mayor Emanuel announced Chicago’s “Resilient Cities” status came about exactly one year after CCGA President Ivo Daalder ventured to the Royal Institute of International Affairs at Chatham House in the UK to take part in a Feb. 15, 2018 program which asked the provocative question: “Should global cities have their own foreign policy and, if so, what would it look like?”

And while that question, derived from a press release on the Chatham House program, is viewed largely “in the affirmative” despite a pretense of objectivity among program attendees, official statements on the same UK program complained that the corporations and universities within cities—with cities described as “hubs of the world and increasingly influential players on the world stage”—are, for now, “independent both of city hall and of overlapping ventures. . .”

But most tellingly, the press release noted: “If cities want to protect, defend and exercise their own interests—with or without the cooperation of nation states—mayors and other city leaders must lead in efforts to coordinate such interactions and ambitions within a unified framework.”

In terms of details, under Resilient Chicago, Emanuel is calling for an all-electric CTA bus fleet by 2040 with the city run by 100% renewable energy by 2035, in coordination with the Sierra Club’s “Ready for 100” program. Few would argue with those “resilient” ideas, or with urban gardening, and cleaner, quieter, faster mass transit systems etc.

But the price is steep, for under this “Resilient” designation, with its “smart city” public surveillance systems, mergers and realignments, the evident end-game is not to foster more local control, but to move global controls to the local level—with no one left behind in a unified framework that is being quietly formulated and implemented. 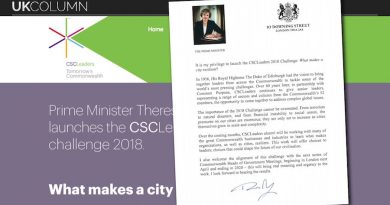 On UK Column Nov. 28: The Hyper-Hypocrisy of Today’s One-World Architects